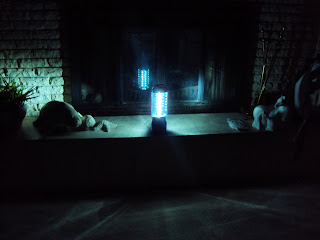 As an admitted flashlight aficionado, I am constantly on the lookout for new models and better ways of powering them. Recently I wrote an article about the big brother of my daily carry flashlight. Unlike its smaller cousin, it can run on either 3 AAA Alkaline batteries OR a single 18650 Lithium Ion Cell. Let me tell you, there are A LOT of choices out there at all price levels for those rechargeable batteries. I ordered a whole bunch (and chargers too!) to test and report on. These are UNBIASED reports as no company furnished any merchandise at all. Here's what I found out... 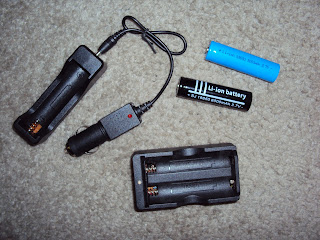 All batteries are not created equal. While researching the 18650 size I found wildly differing claims on capacity. From 1500mAh all the way up to a whopping 6000mAh. Of course I just avoided the lowest ones and ordered some from 3500mAh up to the 6000mAh. Each group was ordered with its own brand of charger. More on those later. Once they arrived (many, but not all were shipped from China or Hong Kong), I got down to testing. I used one of my lights (an XML-T6 Cree version) that can run on 3 AAA batteries or a single 18650. Since voltages vary quite a bit from fully charged to almost dead, the range is actually about 3.5 to 4.2 V nominal, with the Li-ION version staying at a higher voltage for longer and supplying more Amps over a longer time period. In English, it stays at a higher power level and brighter...longer. So on to the test. With two of the same flashlights each running one type of battery, I turned them on and let them run till they dimmed noticeably. The Li-ION started brighter and stayed brighter longer. No real surprise there. Now let's talk about run times.

All over the place. The batteries marked with the highest capacity usually weren't better and the lowest ones were usually a bit higher capacity. Best I could calculate, the nicer ones had around 3300mAh and the cheapest ones were around 1200mAh! All for the same price, each. Be careful, there are a lot of false claims out there. I did find out that the batteries that rate consistently higher are heavier. Around 45 grams. The cheaper "knockoffs" are a lot lighter at 26 grams. Now on to chargers.

Since these batteries can be charged with 5 Volts, they are a natural to use a USB cable as a power source. The higher the amperage the better, as Li-ION can charge at fast rates with more amps going in. (**Within reason!) The typical trickle USB charger at .500mA will eventually charge one, but slowly. 1 Amp is better. The chargers that come with the batteries were, essentially, all the same. They list at around 750mA charging and for the 12 Volt DC charger (cigarette lighter plug) only around 500mA. They will charge...just slowly. Figure a bit less than overnight for a 50% used battery. You can always buy a much better, higher quality charger. In fact, I've ordered several and will be testing them over the next few weeks.

**WARNING!** I know there is a real danger using sub-standard lithium-ion batteries. There is a real worry about "thermal runaway" -- this is when the battery overheats when charging or discharging and it causes a cascade effect, causing the battery to melt down or even explode. Monitor these batteries carefully until you are sure they are working as advertised. It always pays to be careful when dealing with new technology.

So, what's the verdict? You get what you pay for. Sort of. The cheapest ones and the more expensive ones are all the same price...within a few dollars. When you get to the name brands (Panasonic) they are much more expensive, but actually match their rated specifications. The ratio is way off -- you can buy 5 knockoffs for each "real" one. If you find a good supplier, you can get decent knockoffs and have lots on hand.  As always, YMMV!