Do Away With The Dark - The Very Best Flashlights

***Many of you missed this article last week, so we are sticking with it this week! Tune in Wednesday for an all new article on storage in RVs!***

We talk a lot about power and light in our RVs, but what about a portable version? You know, the good old standby...the Flashlight. Flashlights have come a long way since the days of dry cell batteries and "pen lights." The picture to the right was taken with a 1000 Lumen rechargeable flashlight just a little bigger than a traditional 2 AA cell light! Advances in LED technology has made it possible to have more light for less power. Even the smallest coin cell powered LED lights for a keychain put out more light than the old fashioned 2 "D" cell flashlight of yesteryear. OK, I'll admit I have a fascination with flashlights. Ever since I was a kid I've really liked them. Not obsessed, mind you, just impressed. 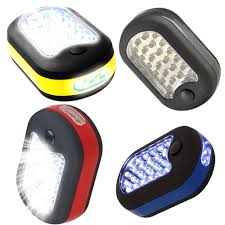 In my RV I have a couple of 27 LED utility flashlights. One lives on my range hood, held on magnetically. The other lives up front in a small container on top of the engine cover. These are available everywhere for under five dollars. Press the button once, and you get a very bright directional light from the side. Press it again and you get 26 LEDs all at once from the side. It has a nice sized magnet on the back and a folding hook so you can hang it wherever you need it. I've had 2 of them for a couple of years now and still haven't needed to replace the batteries! Needless to say, I use them very often. The one attached to the range hood, which is on the way to the bedroom area get's frequent use. These little lights are a must have!

Next up is a set of lights. One of them I've had for a couple of years, the other just came out a few months ago. The smaller one is a single "AA" battery powered LED light. It was under 10 dollars and puts out a whopping 260 Lumens. That's an awful lot for such a small light. I keep it clipped to my front pocket and barely notice it's there. It has a focus ring on the front that slides in and out from a bright point (really a square) to a wide flood. It runs for a VERY long time on a single, available almost everywhere, AA battery. The other one is its big brother. OK, it's not all that much bigger in size, but it does put out a whopping 1000 Lumens. That's a huge amount for such a tiny flashlight.

It runs on a rechargeable 16450 li-ion cell. They cost around 9.00 dollars and the charger can be had for 5.00 online. I've not had to recharge it yet, but it should run about 15 hours per charge. It does get a bit hot around the heat sink, but not terribly so. On a dark and stormy night it's an amazing light. I am going to have to figure out how to charge it from 12V so I have extra choices for power. Shouldn't be any trouble at all. The only issues I could find with both of them was the tiny Allen head screws that hold the clip on, but a small dab of thread locker should fix that up straight away.

If anything, I miss the reassuring feel of a multi "D" cell MagLite. Not only was it a flashlight, but could be a deterrent for the bad guys. I'd hate to get hit with one! We'll have to see what the longevity of these flashlights are. So far it's win-win.