Even The Old Radio Can Learn New Tricks! - A Better Cassette Adapter

Many of my vehicles still have cassette players. I like it that way. I have a large collection of cassettes that were amassed during the early 80's long before CDs took their place. In many ways the cassette is superior. No, really. Try tossing a CD into the back seat and then retrieve and try to play it! They need to be held like their bigger vinyl brethren the LP/Record. By the edges, carefully avoiding scratches. The only issue is most cassette player stereos for cars don't give you a way to input your music or your cell phone. Sure, you could wire it all together on the back if you have a high end stereo, but what about something simpler? 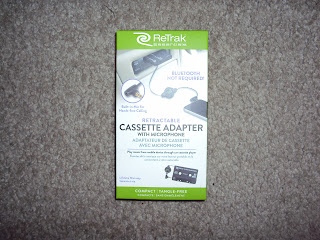 A while back cassette adapters were selling like hotcakes, they looked just like a cassette with a headphone plug coming out of it and simply plugged into your cassette tape slot and allowed you to plug into the headphone jack on your music player. Voila! Music through your stereo. Worked pretty good. Then most folks abandoned their standalone music players for their phones. Unfortunately, most phones lose their ability to "hear" when the headphone jack has something plugged into it. Now what? Simple, get one that has a built in microphone. I found just that for $2.50 at Wal-Mart. In the clearance aisle no less! 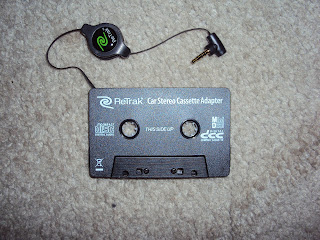 The next question...would they live up to the hype and actually work well to feed music into your stereo and your voice into the phone? In a word...YES! Not only does it allow you to use your phone as a music device, it allows you to use your phone, hands-free while getting loud, clear sound from your stereo. Win-Win! In addition, it has a really handy retractable cord reel that you set at various lengths or pull all the way out. It stores the cord neatly when not in use. Not so great is how careful you have to be to pull both sides equally or the cord will tangle. Be gentle...you will be rewarded.

You can use this gizmo with almost any installed stereo in your RV as long as it plays cassettes tapes. After my recent stereo upgrade, I have built in Bluetooth capability so don't need it in the RV. If you have an 8 Track player (and remember what that is!) you are out of luck!