Mystery Switches in RV - Just What Do They Do? 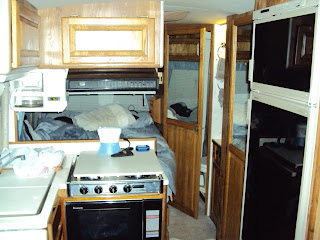 I was in my RV the other day to check that everything was OK. Storing it for the winter doesn't mean nothing can go wrong! I check for water leaks, critter intrusion and mechanical/electrical issues about once every two weeks. It's also a good idea to check your battery water levels and top up if needed with distilled water (especially if you are leaving them charging over the winter!). During my walk around inside I noticed the "odd" switch by the bathroom vanity sink. When I first bought my RV, I had NO idea what it did. Well, after almost a year..I figured it out....luckily!

Turns out it was wired to turn on the outside light on the outside wall of the RV, opposite from the passenger side and the main door. It sits just above the access door for the water heater and close by the dump valves and connections. Good place for a light, but when I purchased the RV, it didn't work. Well, the switch on the light itself wouldn't turn it on....even replacing the bulb didn't help. You probably can guess where this is going. I had flipped the switch on the light a few times (it must have been in the off position initially) and then at some point flipped the switch by the vanity. The next evening I had stopped for gas and got out of the RV by the driver's side door. Lo and Behold, the light was on! Had likely been on since the day before! You really can't see its illumination from inside the RV because of my thermal covers so I had no idea it was on.

Well, I flipped the switch on the light itself and it turned off. At that point I was happy it was working (it's a good place for a light!). When I got back from the trip I looked into it a bit further. If I looked into the dark recesses of the vanity sink cabinet I could see the wires running from the "mystery" switch to the back of the outside light! Aha! One of the wires had come lose from its taped- up junction. Upon closer inspection I realized the switch was lighted and that disconnected wire controlled power to light up the switch! Aha, again! The idea was the switch outside was left on and the switch inside used to turn on the outside light when needed. The switch itself would light up to let you know it was on. Good idea.

But why put it in the vanity cabinet? I suppose it was the easiest place to do the wiring.....hey, at least I figured out what the switch actually did! I'll bet you all have some mystery switches too....Come to think of it...the one above the driver's seat was a mystery too....but that one I figured out!