When I first bought my RV, it had a 13" CRT TV with a VHS player. It seems so ridiculous now, but that was pretty decent in a small coach in the early 90's. One of the first modifications I made was fitting an 19" LCD monitor into the same space. Later on I added all digital media playback which opened up a lot of content, Depending on your layout, you may only have a screen at the front of the coach and NO seats face it directly. Lots of stiff necks watching it with your head turned. I'd always wanted to move the screen across from my couch so multiple people could watch and enjoy. For Christmas, a friend bought me an LCD Pico Projector as a gift. While I was quite skeptical about it at first...now I'm sold on it. Especially in an RV environment. So how could I watch the projected image on a nice screen ACROSS from the couch? I thought I had an idea...now I have a better one!

Spandex is an amazing material. It's not just for tiny swimsuits anymore. You can even stretch it out and use it as a screen. Lots of companies offer the raw material to do just that. I was going to stitch some seams, add some grommets and tie-downs and affix it to various pieces of my RV to have a nice large flat screen. This turned out to be a lot of work, for not a great screen. It works, but is not ideal. What I really needed was a regular old-fashioned movie screen. You remember, the ones that rolled up into a cylinder like a window shade. I use one at work on occasion. Works GREAT even in a lit room. Problem? It's heavy, REALLY heavy and hard to store since it's rolls into a rigid long case.

OK....how do we get around that? Start by doing research online. I looked at every portable projection screen setup that was available. There were some amazing ones that took up little space, but they were all too small. I wanted one that was around 63" horizontally and 36" vertically. or , as TV folks like to say, 72" diagonal picture. That's a HUGE improvement over even my 19" LCD.

Finding one close to those, almost 16:9, dimensions was impossible, Then  it occurred to me...what about a ~60" by ~60" 4:3 screen? Just don't pull it all they way out! Eureka! There were LOTS of those around...really inexpensive too. So I ordered a name brand one for $32 including shipping and waited until it arrived. It was big. And solid. And I was worried it wouldn't fit under the couch, And it was still a bit heavy. Ah well, I decided to try and get it to work. I began looking for ways to hang the cylinder from the ceiling or under a cabinet so it would be easy to pull down and use. Did I mention this thing is pretty heavy? I just couldn't figure out a way to mount it safely that wouldn't leave lots of big ugly hooks exposed. 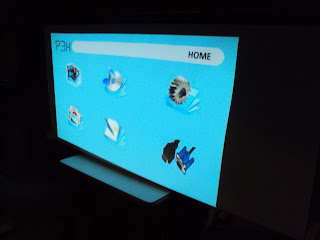 Besides, if it was mounted below the cabinet, I'd lose around 3.5 inches of screen. Not acceptable. Now what? I was playing with the screen sitting on the table when it dawned on me....since it was heavy, wouldn't I be able to LEAVE it on the table and pull the screen UP instead of down? Why not? I would only need one hook to hold it up, all the weight was on the bottom. WIN! Then I discovered the place that the screen naturally locks would allow me to rotate the cylinder so it was BEHIND the screen! Now the entire screen is usable! Win-Win!! It looks AMAZING! The picture is much crisper and brighter than when I used the Spandex version. Much Simpler to setup and take down, too.

Once I figured out where to place the projector, right now it sits on a short tripod (that was included) on the back of my couch, but later will be hanging from under the cabinet across from the screen AND be easily removed and stored. I was in business, It looks great! Next issue will be figuring out how to get better sound without resorting to a new stereo and all that power draw, No worries...it's a work in progress. Stay Tuned!

Be Seeing You... Down the Road,