TV on the Monitor? More Entertainment for the Buck 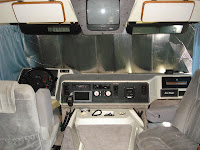 My RV originally came with a 13 inch CRT TV installed above the dash in a very nice full-width fiberglass enclosure with cabinets on either side. It was wired to a single speaker from the in-dash stereo and had various entertainment sources connected. There was a VHS VCR, a DirecTV Satellite receiver and the good old analog TV antenna. I guess this was okay for the time (Early '90s) but I wanted more! I'll admit it, I like watching TV out in the woods. Communing with nature through the glass while eating microwave popcorn and watching a movie. Yay!

After some serious measuring, I found that the most I could do, while being able to keep the screen within the old enclosure, was to use a 19" LCD computer monitor. It would do everything the TV would do, while being lighter, less power hungry and have the ability to support VGA and digital signals. I was stuck with 4:3 since a 16:9 version is too wide at the 19" (or so) size and the original TV was the old style "square" cutout.. Ah well, I would have to learn to LIKE letter-boxed content!

Finding a brand of computer monitor, and a model, that would max out the physical space was NOT easy. I settled on an ACER 19" LCD, 1280 x 1024 resolution. Now all I had to do was figure out how to connect all the video and computer sources to the monitor. I found several companies that manufactured a box that would take various video inputs -- RF (old style cable TV "F" connector), composite, component, S-video, and VGA -- and send them out through a standard computer style VGA connector to the monitor. I can choose the resolution displayed and a few other options from a nifty on-screen display. It would also run off either 120V with a wall transformer or directly from a 12V source, so it seemed like a good choice.

I would run the audio from this converter box into the front input of an in-dash car stereo unit, since the speakers are all wired to it already and the sound is quite good. Eventually, I will re-wire it permanently behind the dash. 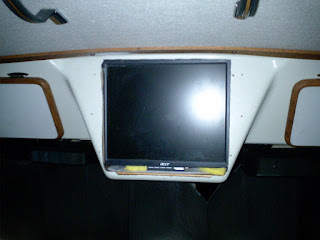 With all the video and audio feeds worked out, now was the time to work on the actual physical modifications needed to put in the new monitor in place of the old 13" TV. After removing the trim surrounding the TV and removing the screwed in hold downs I could disconnect most of the wiring to the TV. It seems that someone actually hard wired the TV speaker into the right front car stereo speaker! OK that got clipped. Once removed, I had a large space going all the way to the front of the RV with various wires running back and forth.

On either side of my RV's TV there are storage cabinets above the driver's and passenger side seats. They are used to house the entertainment systems' components. On the left is the DVD player and the satellite receiver (I also have a 400watt pure sine wave inverter in there for backup) on the right is the VHS(!) VCR, the VGA converter box, the original antenna/TV selection box and the digital TV receiver. All of this had to be rewired to make it all work. 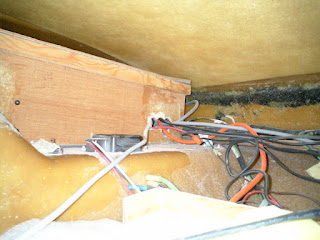 The enclosure needed to be modified, meaning out came the saws, Dremel, sanders, grinders, small explosive devices and bandages. Did I mention it's all fiberglass with a bit of wood. Working with a sander or Dremel and fiberglass is not fun. The dust is nasty, gets everywhere even if you cover everything with a sheet and sticks to every surface including you. Oh, and it's bad to breathe it in as it does not so nice things to your lungs. Ah well, you gotta do what you gotta do! 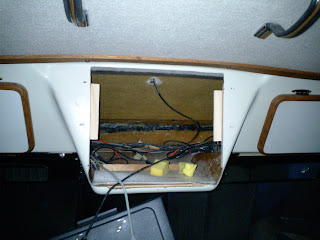 Once we "relieved" the material around the new LCD monitor so it would fit we had to figure out how to get it to STAY in that space. Remember the old 13" TV was much deeper than this new one. First we tried a triangular base, screwed into the wooden platform it was sitting on. That didn't work well at all. Eventually, after much trial and many more errors, I stumbled upon an idea to simply screw "tabs" to the sides of the enclosure so when the surround trim is screwed down it holds everything in place. Worked like a charm. 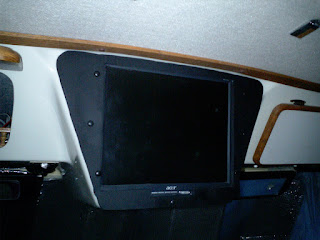 The old TV surround was obviously NOT going to fit the new LCD TV as the cutouts were completely different. We TRIED to modify the existing one, and ended up destroying it completely. After another trip to a home store to buy a sheet of thin/strong wood veneer and drawing (and redrawing) a template about 20 times the first cut was made. Then, back to the home store for another piece since the cut was on the wrong side and everything would have been reversed. Yes, Murphy IS an optimist! Okay, with the surround cut and painted to match the old one, it was assembly time. All the wires had to be snaked and bound...well at least made a bit neater. You know, toward the end of the project things tend to get lost in the shuffle. Besides, I'll go back in after it's done and make it all neat....right?

Mount everything up, tighten all the screws put the screw caps back on, step back, admire the look of the project, then realize you haven't connected the VGA cable to the back of the monitor! Oh yes, not a happy camper was I. Reverse the above, connect the wayward cable and move forward again.

Now I have all this storage behind the new LCD monitor, wonder what I can use that for......oh, and how about adding HDMI capability? Next time!