A while back I wrote an article about changing over your old RV Television to a computer LCD monitor. It has better resolution, uses less power and is a lot lighter. I installed a box that would allow me to play my VHS/DVD/Satellite/Digital TV through the monitor using the existing VGA connector. This has been working great. Lately, many people are playing their entertainment on their computers or "streaming" video from the internet. Nowadays you can do that on your smart phone! Since I already have a computer monitor, it stands to reason I should be able to play back digitally stored audio and video files on it. Say from an external Hard Drive or one of those newfangled "thumb" drives or even a memory card of some sort. Usually these are connected via USB which most computers have from the factory. Now I already have a way to feed VGA signals through my converter box and into the monitor. It's a "pass-through" so I don't even need to turn the converter on to see VGA displayed on the monitor. I could simply hook up a laptop to that VGA in and be done with it. You've probably already guessed, that was WAY too easy for me. I had to get fancy.

On the market are quite a few gadgets that will allow you to play your digitally stored video from a USB connected device on your TV. I could have used any of those. However, I would have had to remove one of my existing inputs. Sacrificing my DVD or Satellite or VHS or Digital TV wasn't going to happen so I had to find one that used the only connector I had left. VGA. That doesn't mean you can't connect via HDMI (which I don't have) or COMPONENT or even COMPOSITE Video. I just figured if I already have a high resolution monitor I should use it to see HD. 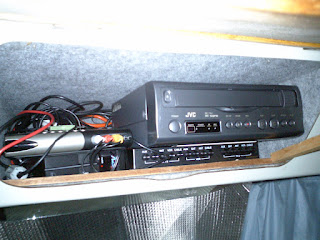 That being said, I set out to find a model that would give me the best mix of digital media playback AND low power consumption, in addition to the aforementioned VGA output. There are A LOT of these beasties floating around the internet! I finally settled on one by a company called KWorld. It was the only one that would play back almost any media I could throw at it and it had the VGA output. It was pretty small at only 5" x 3" x1" and used very little power at 12Volts. Less than .5 amps. None of the ones I looked at had network connectivity. This means I couldn't use it (when connected to the internet) to play media from any of the online streaming providers like Netflix or Hulu or even YouTube. Since I have a convertible Android Tablet/Netbook that wasn't really a problem. Nor a feature I needed the new box to provide. You also wouldn't be able to play files stored on your laptop through the ethernet or wireless connection. You could simply copy the files to a thumb-drive or memory card and play them that way.


As everyone who reads these articles knows, I am always short on space in my RV. Any space i have tends to be small so I like to maximize what can stow in any given "cubby-hole." With a judicious amount of wire re-arranging I managed to make a small space that this unit, being so small, fit right on top of. Sitting on the box that converts everything to VGA (yes, it has a pass through!). After installing the box and making sure the wires were all squared away....nothing worked. *sigh* Now what? I pulled everything back out and it turned out to be the AC/DC power adapter wasn't making great contact with the power strip. A little bend of the AC plug prongs outward and we were in business!


The system works well and by running the sound through the in-dash stereo system I have great pseudo-surround sound with decent bass. At some point I'll clean up all the wiring to make it neater looking or figure out how to hinge the LCD Monitor to allow easy access to the big empty space behind there so I can hide it all!


I do still have the annoying "hum" coming from someplace, but that's another project!


Be Seeing You...Down The Road,