When In New York City Go To Katz's Deli! Yes, On An RV Trip!

I have a place in Manhattan, have had it for MANY years. Recently, since it's RV season, I was wondering what I would do and where I would go if I was staying in nearby New York City in my RV. I figured having a few days would be best since there are so many things to do and see. In later articles I will cover as many as I can think of, but when I began to think of where to go the topic of "where to eat" came up first in my mind. Before  I tackle that...just where can you stay in NYC in an RV? The answer is, essentially nowhere! That being said, you CAN stay in New Jersey, just a short bus or Water Taxi ride from Manhattan right near the Liberty Science Center (at Liberty Harbor RV Park). It's not much more than a large parking lot with hookups, but you'll never notice as there is so much to see and do, all you'll be doing is sleeping there! OK, back to eats! 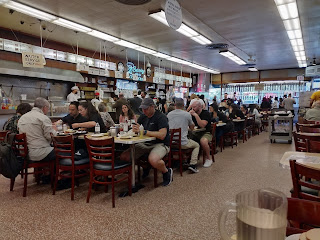 If you've ever seen the cult hit movie, WHEN HARRY MET SALLY, you are already aware of Katz's Delicatessen. It's the restaurant made famous (well, MORE famous) by the scene that involves Meg Ryan, Billy Crystal and Rob Reiner's Mom (Estelle), and an Amazing sandwich! REALLY amazing. Watch it, you'll see what I mean. Well...while I can't speak to the effects of eating one quite as well as Meg Ryan did, I can say the Corned Beef and Pastrami are second to NONE. It's a distinctly New York experience. Surly waiters, a decor that leaves much to be desired, but totally amazing food. It's been around a long time. Really first getting internationally famous by offering to ship U.S. Soldiers in World War II care packages. "Send a Salami To Your Boy In The Army!" Many mothers did just that. A taste of home and a way to introduce fellow soldiers to the tastes of New York Deli magic. 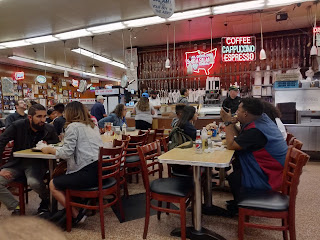 The full menu has so much more on it. Knishes, those doughy pockets of potato, kasha, or meat (or combinations) that go down heavy and smooth...yum!! Lots of special ethnic dishes and old deli staples are available as well as all-day breakfast. The corned beef and Swiss omelette is a personal favorite! Finish it all up with a New York Style Egg Cream. No, there's no EGG in it at all. (Go figure!) It's a bit of milk, a bit of chocolate syrup and some seltzer. Mixed to a froth...it's delicious. And don't forget to buy a salami!


Yes, RVing and including New York City is a tough call...plan on lots of time to look around all the sights...museums, skyscrapers, neighborhoods, restaurants, memorials...so much to do, so little time. Try it, you'll like it.