Bulb Check! - Sometimes They Are Out And You Don't Even Know.

I only had one tail light working. I don't know when it stopped working, but since we have yearly DMV inspections and mine is due by the end of October, it could have been almost a year! Yup..never noticed. That's bad. I know I should check all my lights (and oil/fluids/air) before each trip, but sometimes I only do SOME of those items. I know...I'm bad. From now on, I will be fully checking my rig before I move out. It's a smart thing to do. Well, what about changing light bulbs in RV lights? Sometimes it's really easy. Sometime it's not. My tail lights were...in between. Here's what to do.

Take a look at your tail lights. Are they separate lenses, one big lens, are there screws holding lenses on to a separate assembly? None of the above? Well, the first thing to do is gain access to the bulb itself. In my case, it was a bit more complicated. I had to remove the entire tail light assembly from the back of the RV, lens, reflector, everything! They are about 2 feet long, with 4 sections of wire harness coming out, so that was awkward. Thankfully, they aren't all that heavy. Once removed, I could see a bunch of sockets on the back that push in and twist to remove. As long as you line up the curved slots properly. Mine have 2 smaller curved pieces and one larger one, so they will only come out when everything is lined up. Even then it required a bit of...finesse. 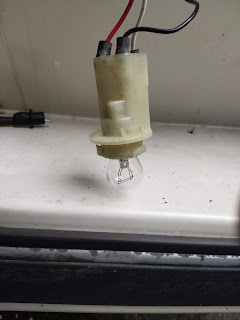 I should have found a small table or something to lay the lights on after they were removed so I didn't have to keep holding them up. Ah well, next time. I managed to get all the light bulb holders and bulbs out of the fixture. HINT: Remember which bulb socket goes in which hole! (Don't ask.) It was pretty obvious which one wasn't working. The bulb was broken. And sharp. (Again, Don't ask.) After the bleeding stopped, I found another 1157 type bulb and replaced it. Didn't work! Hmmm...Upon closer inspection, the bent metal strip that makes contact with the metal ground of the bulb was broken off. I soldered on a small piece of wire to make contact and it was fine. I SHOULD have replaced the socket, but my tail lights are sourced from a 1989 Mercury Sable (mounted upside down!) So I would have to research a bit to even find out what socket it was! The fix should hold for a while. At least until I get back from my long trip next week. Of course, I will be checking operation each time I stop. Well, maybe not EACH time, but more frequently for sure!

With everything working, I put all the light sockets back in the lens/reflector housing and gently put it back on the RV. All done. Mostly. After putting the acorn nuts back on the assembly, I noticed one side was dimmer than the other! Huh?!? OK..so took it back off and looked at the terminal. No difference at all, voltage wise. After fiddling a while it turned out to be a bad/loose ground coming out of the trailer hitch wiring! That was a couple of hours of hunting... So I fixed the ground and (since the tail lights were back off, I replaced all the bulbs with LED versions. MUCH brighter now and less Amp draw to boot.

All in all...pretty easy. You can bet I will be checking my lights/signal before EVERY trip! Fool me once, shame on you. Fool me twice...shame on me!