The Sticky Stuff - Tape And Its Myriad Of Uses

Duck Tape. Yes, "DUCK" not "Duct." In the ancient history of war, a company came up with an adhesive-backed cloth strip that was watertight, mainly used to seal ammo cases during WWII. The cotton cloth was known as cotton "duck." Much later on HVAC workers used this stuff to seal the joints in air ducting to prevent leakages. Hence the DUCT name. Worked pretty well and the name stuck. For years I had been gently correcting folks who called it DUCK tape. Not any more! Over the years this stuff has become one of the most useful and versatile things on the planet. If you search around, you'll find some fascinating jobs it's been used on. I've even seen Clothing made of the stuff that doesn't look half bad. I always keep a few different types around the RV...comes in handy...a lot! 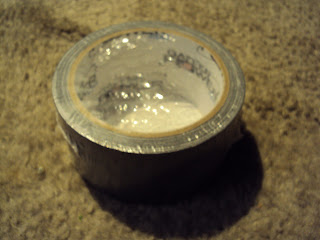 For any aspiring MacGyvers out there, the ability to fix something on the fly is a time-honored tradition. This tape makes many of those spontaneous repairs possible. Got a sliding window that won't stay closed, a strip of tape along the top and bottom will hold it until you can buy a new latch. Have a piece of fiberglass or plastic that's falling off your RV body? Tape it! Have a crack in a skylight or vent cover and rain is coming in? Tape it! Of course there are places that it will not work. If it doesn't stick to the surface, it's not going to do you any good. For everything else you can imagine, I'll wager it will.

There are MANY brands of this stuff available. Some are very basic and can be used to make quick, temporary repairs. Some are much more robust, 100 in./lbs. of adhesive (or more) and almost impossible to tear. I've seen that stuff used to repair airplane wings and fuselages! Some may remember the nickname "100 mile-an-hour" tape. It was. Maybe even faster! There was a TV show named "Mythbusters" that really liked duck tape. There were several episodes about it. They even built a working sailboat that they sailed in open water. Well, in the San Francisco Bay anyway. Pretty impressive, if you ask me. Not impressive enough? How about a working Black Powder Cannon. Yes, I said CANNON! It launched full-sized bowling balls 700+ yards! Wow! Now that's amazing. Not that I would ever NEED a duck tape cannon, but it's still pretty amazing for a simple piece of tape.

I always keep several rolls of various strength on-board the RV. You never know when you might need some.