I just got back. Normally, I'm fully bummed out that my RV adventure is over. This time I am glad it's done. Here in the North East we are usually just getting into Spring weather around the beginning of April. I start the process of de-winterizing and stocking the RV for the season's travels. Well, this time I got the opportunity to buy a Helicopter that I had been looking for, but the catch was I had to pick it up in Wisconsin. OK...sounded like a perfect time for an RV trip, problem was the weather hadn't been cooperating and it had been well below freezing for most of the days leading up to my departure date. The day before, I had warm enough weather that I was able to get the fresh water system operational and do some basic startup maintenance. Then the morning came and off we went. In the rain. More on this a bit later. 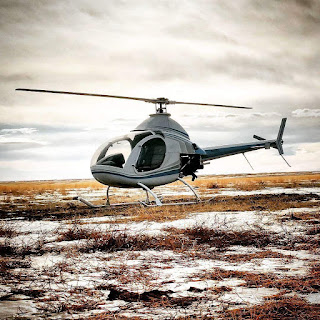 The helicopter is a Rotorway Exec 90 (heavily modified). It seats two people and will fly about 2 hours or 200 miles between fill ups. I had built an older version with a friend in the late '80s early '90s and was familiar with the issues and benefits associated with this particular type of aircraft. I've been flying helicopters (and airplanes) for Many, many years and it was time for me to mix flying with my RV. When everything is set up, I will be going to events around the country with the helicopter in tow. You know, fly-ins, Oshkosh, aviation related events. Great people, fun events with good food and a place to sleep comfortably. What else could one ask of an RV trip!


So off I went to Black Falls River, Wisconsin, on a rainy Thursday morning. Expected trip time was 16 hours and some number of minutes. All was going well until it wasn't. I received a call that the delivery wouldn't take place on the appointed day, but a day later. No worries as I had built in an extra day for travel stops and to see some interesting sights both ways. We arrived in a rainstorm to the Walmart parking lot in Black River Falls and went inside for some supplies and to notify them we were staying until the following day. Then the rain became Ice, the parking lot was completely covered, as was the RV. The temperatures were dropping fast. I began to worry about freezing pipes and water damage. The furnace was running...a lot! Thankfully the inside temperatures remained a comfortable 68 degrees thanks to the extra insulation of the window covers. 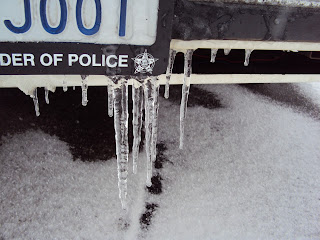 Overnight, you could hear the ice and snow hitting the roof and sideways into the glass. The RV was rocking from the gusts of wind. I'm happy to report no leaks at all! At least that's a good thing. I've also discovered exactly where the air comes in.When it's that cold, you find them pretty quick! Definitely going to get some weatherstripping under the main door and under the dashboard. In the morning we awoke to 1/2" of ice all over the RV and frigid temps. Ice was still coming down in tiny pellets. Felt like riding my motorcycle in the rain, little pin pricks all over your face.

Then the truck towing the helicopter on its trailer arrived. No lull in the weather. The cover came off the helicopter and the moving blankets secured with bungees and layers of 20" wide stretch wrap (U-haul about $20 for 1000 ft.) went on. That stuff is AMAZING. Covered everything (the most important being the front windscreen "bubble"), holding the doors closed and protecting from stones and road debris. Though putting it on in frigid temperatures and high winds isn't much fun at all. Especially while being pelted by tiny ice pellets! Finally it was done and the trailer ready to be switched over to the RV. Of course, the hitch ball I had was 2" and the proper one for the trailer was 2 15/16" So, back into Walmart to buy one. THAT'S why it was good to meet there. Lots of Trailer components, just in case! Also got some RV sewage tank treatment as I was running low. Oh, and a few extra snacks too!


Once the hitch ball issue was fixed and everything hooked up (thankfully I had the right trailer connector!) the ride home began. In an ice/snow storm. My RV wasn't designed with this weather in mind, but really performed admirably in the harsh weather and icy road conditions, even towing the trailer! Color me impressed. Then, the wipers stopped wiping. About 2 miles down the dark road. Nowhere to pull over as construction had removed the shoulders from the list of choices. So, driving without wipers for a few miles to find the next reasonably safe spot to fix them was, needless to say, a challenge. Once found, it was a simple matter of removing ice buildup from the blades and getting underway as quickly as possible. The ice had built up on the roadway and was like hitting inverted nasty potholes. Every bang had me groaning with the equipment waiting for something to break.

The snow lasted for many hours, slowly turning into freezing rain, then just a hard downpour as we neared Ohio. Not fun at all. We spent the next night in a truck stop, noisy...very noisy. But I was grateful for the break and the long rig was easy to park in the long, well marked spot. In the AM, it was still raining, and ice was on our tail, so I left at 6AM and got as far as I could. We had missed the ice, and pulled in to refuel in merely a rainstorm.  Back on the road again, lots and lots of rain with no end in sight. Made it most of the way home, spent the last night only 314 miles from home. Yes, in the rain. In the morning we made a leisurely breakfast and finished the ride home. Still in the rain!

Finally arriving home, I had to switch vehicles to get the trailer where it belonged and back the RV down the long driveway into its regular space. I was proud of how well it drove and handled the rather harsh conditions. Made me happy I had the RV and got me thinking of the RV/Helicopter adventures to follow.