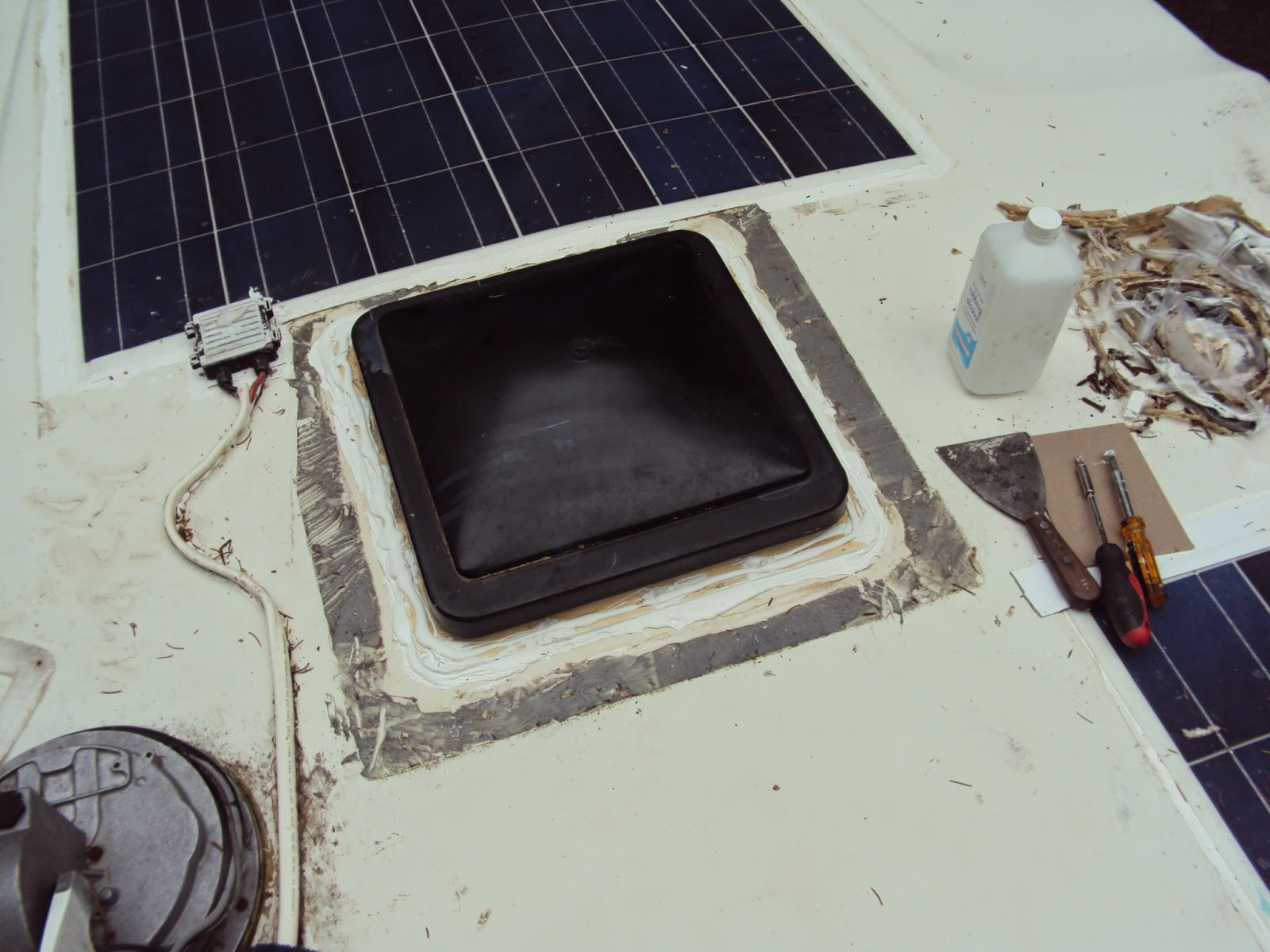 Some days you get the bear and some days it gets you. After last week's battery almost meltdown and fire, I thought I was "safe" for at least a little while. Nope..As I always say, "Murphy was an optimist!" We've had a fair amount of rain these past few weeks and I discovered a leak coming through my front 14"x 14" fantastic fan/vent. It was pretty bad. Stains on the carpeted ceiling and rusted screws. I HAD to fix it. or risk severe damage to the wooden and steel understructure of the roof. Given time, water will find a way to ruin wood and steel. that's just how it works. 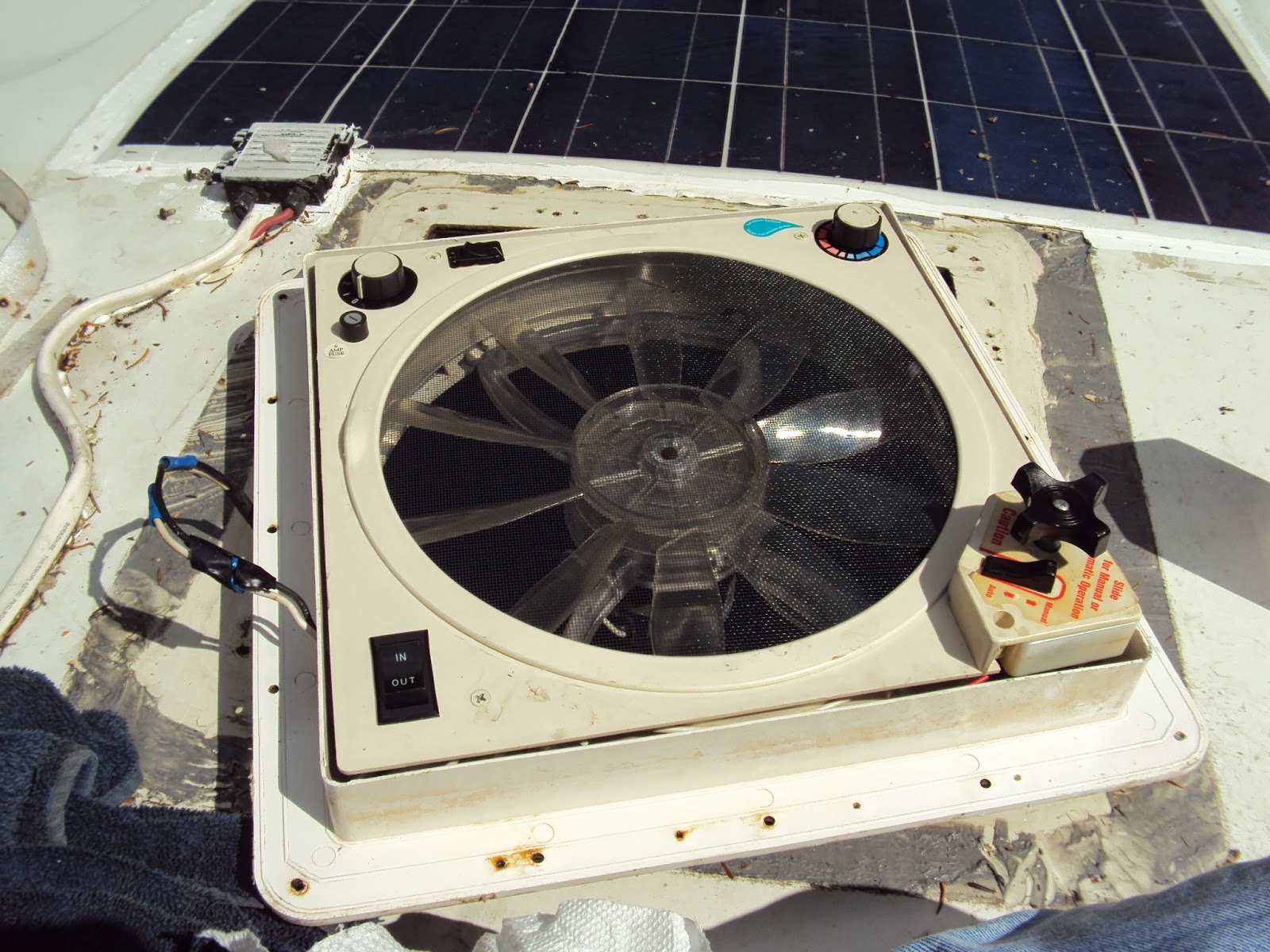 Fixing this kind of thing the right way will almost always involves removing the entire assembly from the roof and re-installing it. Of course I had just gone over the 4 seams with eternabond tape, so thought I was safe from leaks. Nope. So in between rainstorms... seriously, I almost didn't make it (It rained a couple of hours after I got the sealant on!)
First, removing eternabond tape is not fun at all. You pull it up while simultaneously slicing it with a razor knife getting as much of the adhesive residue off as you can. Since I am going to replace it with new tape, I didn't have to clean it off the roof. This is a GOOD thing. 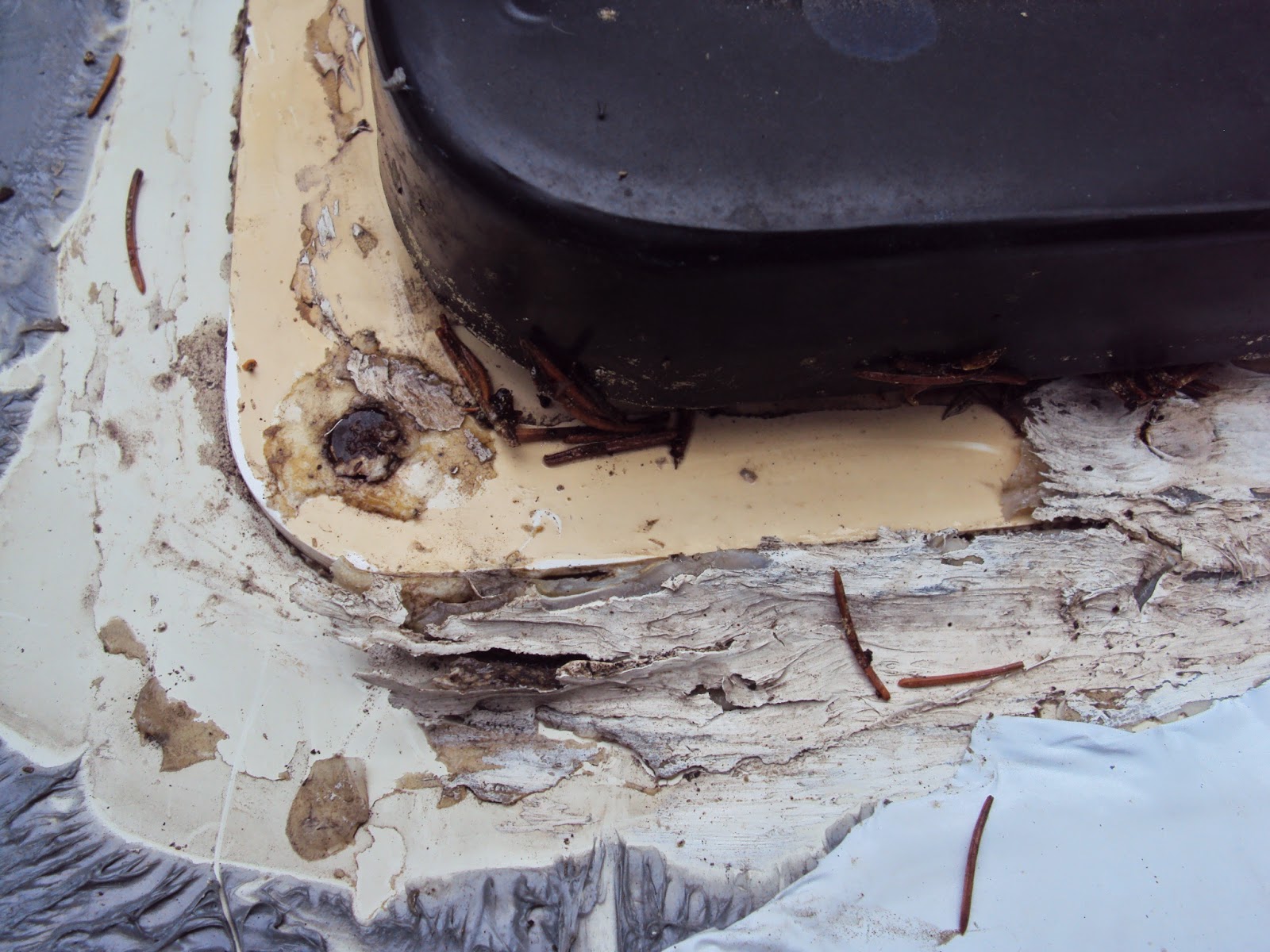 Once it was all removed, I could see the cracks in the old sealant AND all the places that previous owners had attempted to re-seal them with silicone. Most sealants and repair bonds will NOT stick to silicone very well. Or at all. Most of it simply peeled right off. some I had to scrape with a putty knife to get it started.. Some was really resistant and tough, likely this was the original seal from the factory. I scraped everything down to bare roof material (fiberglass in my case) and wiped it down with alcohol before I began re-sealing. Next I had to remove the vent and fan assembly from the roof. 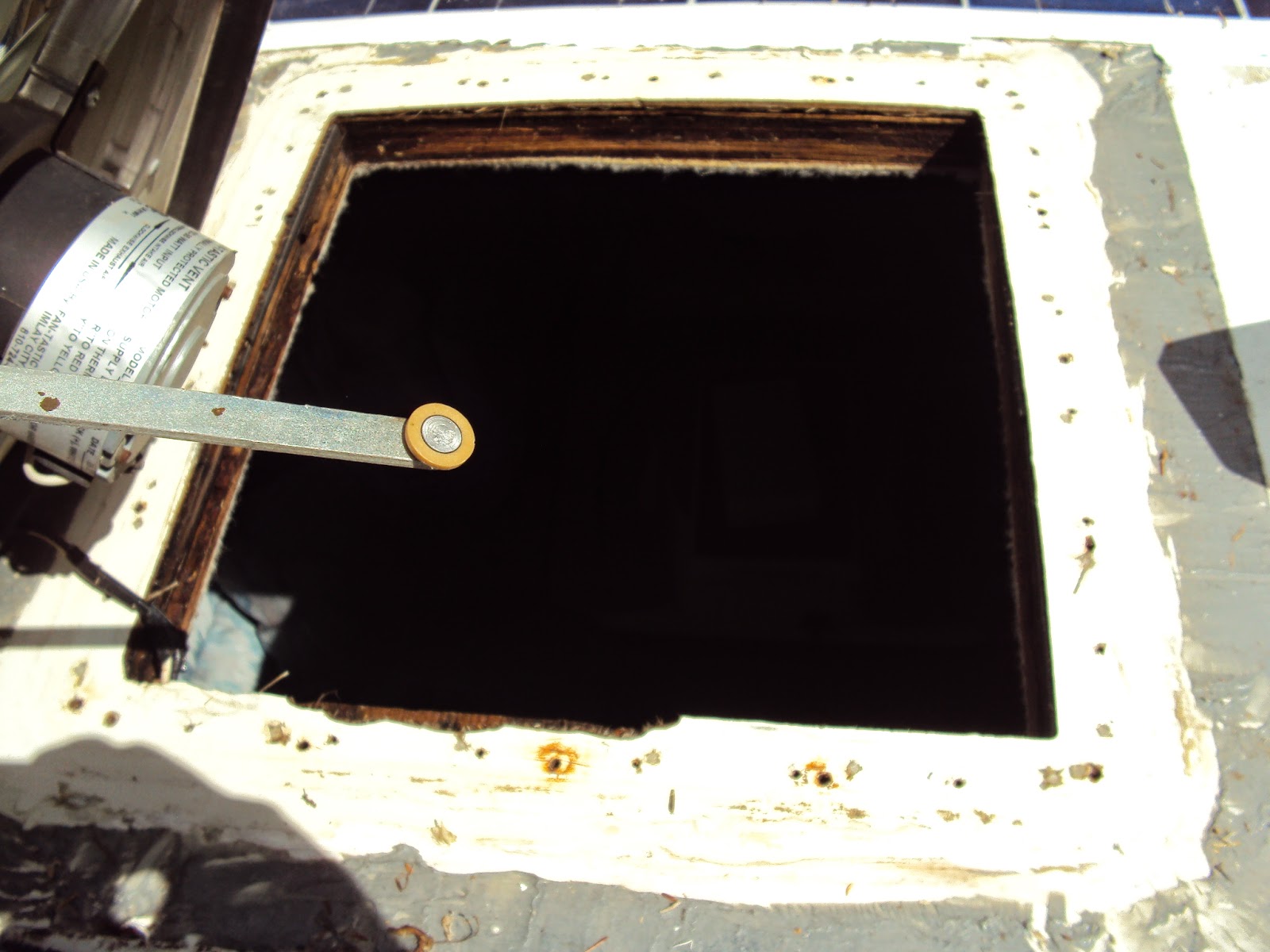 You have to remove all the screws in both the top and inside vent trim...some of them wouldn't screw out because the wood was rotted and wet. Just put a lever (putty knife, screwdriver, etc.) under the screw head and gently unscrew. Should come out easily. I removed the rotted wood and replaced it with plastic shims from a home store. You can screw into these and they won't rot or rust! Then clean both the underside of the vent housing AND the roof where it attaches. I then used some double sided tape similar to eternabond to attach the vent housing to the roof.  Run a small bead around the underside of the vent housing and place in the opening. You could also put some sealant in the existing holes.
This is your first seal, so make sure it's pressed down evenly and firmly before continuing. 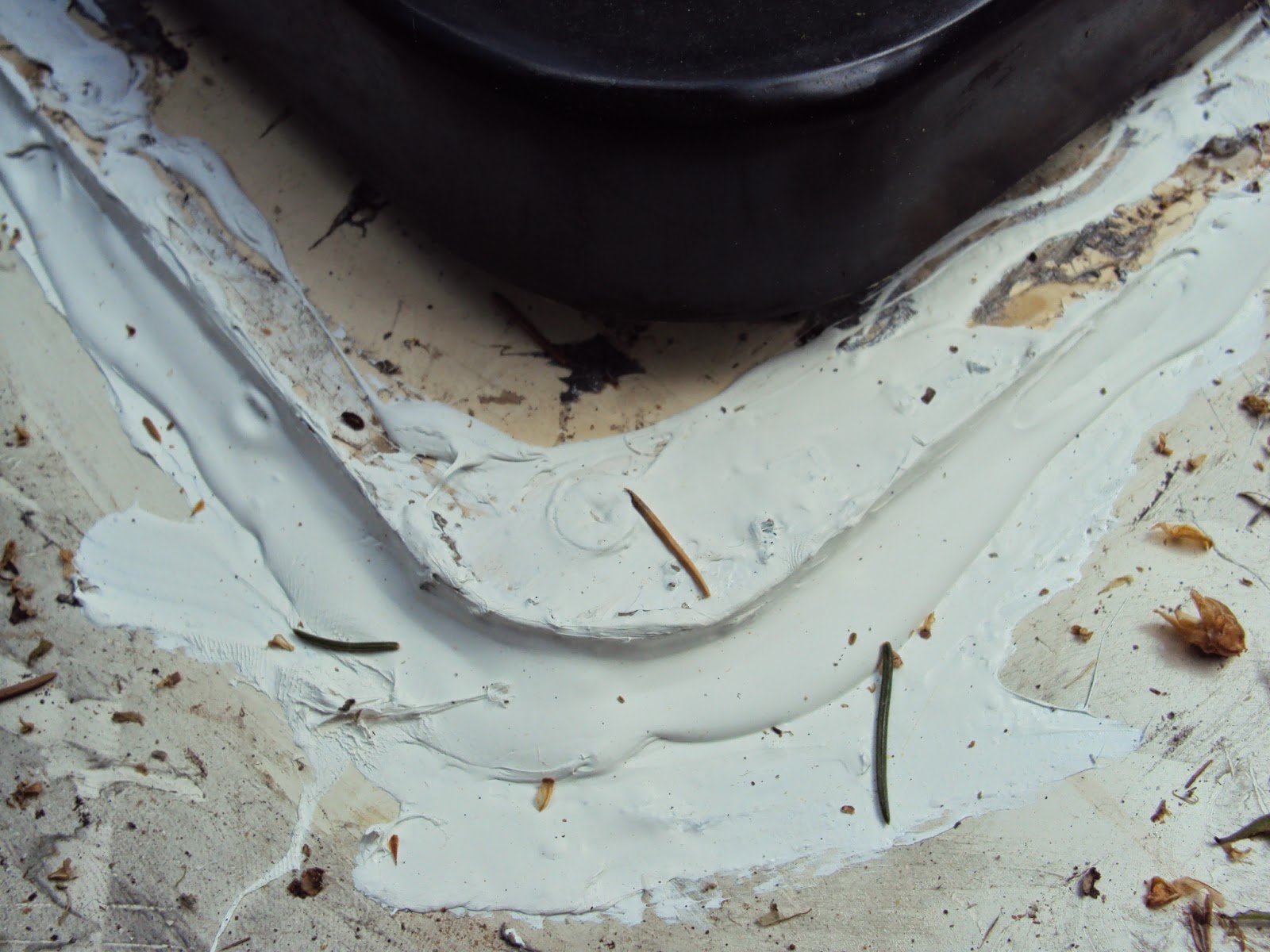 Next up is putting in new screws. I went with SLIGHTLY larger and longer stainless steel screws. They fit through the exiting holes in the vent housing and would "bite" better into the wood underneath. As you tighten the screws, some sealant should leak out from underneath. THIS IS NORMAL! and assures you of a good seal. Next up, run a small bead around the edges and over the now tightened screws. i used self-leveling sealant, so it will flatten itself out over time, while it cures/dries. Make sure everything is secure and  begin your cleanup. I decided to let it cure/dry for at least a week before re-applying the tape.
Partially for aesthetics, and mostly because I am too lazy to remove all the leftover adhesive!

It rained a couple of hours after I had applied the sealant, luckily it had "skinned up" well enough to resist water and I could detect no leaks. This was NOT what I had planned on doing Saturday. But....what are you gonna do?