A while back I wrote an article about a massive roll-able potholder/counter protector. That thing worked great, but was a little large for smaller pots. I was wandering through (yet another) liquidator store this past weekend and spotted these little square beauties. At first, I thought they were all grey. That's a color that works very well with my interior design theme. Not that I find that at all critical, but it's nice to have nonetheless. I believed that all the way home. At least until I opened them and found it to be untrue. In actuality, there were 4 different colors. All shades of grey(!) I decided to keep them. Why? Read on to find out. 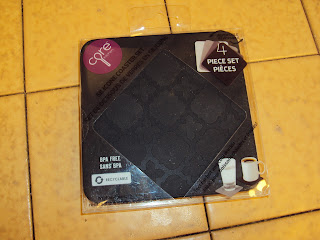 First off, they still look cool, have a nifty pattern on one side, and I like the other colors well enough. They work great as pot holders and as counter protectors for smaller pots and pans. AND you can use them to grip stubborn bottle and jar lids. No, really. If you get a lid on a jar that will not screw off, grab one of these and cover the lid with it. Then twist normally. You have such a better grip, they open far easier with than without. I guess you could use the larger one the same way, but that would have to be a very big container to make it...not awkward! 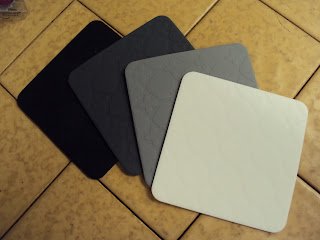 How much were they? Just $1.99 for the set of four. If I may take a bit of a detour here for a moment, they were packaged in one of the most difficult top open containers I have ever experienced. I finally had to resort to a razor blade to get them out! Why is that? Ever since they began to use the so-called "high security" packaging to thwart shoplifting, I have found so many packages that are difficult to open it's nuts. Most of the time I use a pair of scissors to cut around the edges, but I've still sliced myself on the sharp edges of the plastic. OK...I'll stop ranting. But it's annoying...you know?

Back to the little squares of coolness. Yes, I know, that's a bit of a reach, but they are useful. And useful IS cool in my book. If you want four of the same color, you could always buy 4 sets and make 4 sets of various colors. If you do, I'd like some more gray ones!