Even The Simple Repairs - Time For A Battery Change! 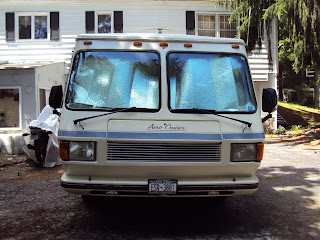 Let's face it, everything wears out eventually. It's the nature of things. A couple of years ago I avoided a near catastrophe when one of my house batteries almost melted down in the tray. Very BAD. My chassis battery, that's the one that starts your engine and runs most of the driving accessories in your rig, was very old and was beginning to cause multiple problems and needed to be replaced. I had added an automatic maintenance charger a few years ago, but that wasn't keeping up with the buildup of resistance inside this old battery. Well, time for a new one! 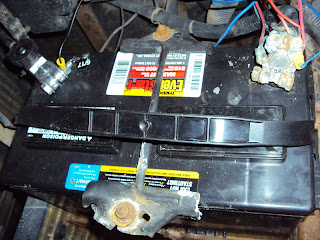 To replace your chassis (or engine) battery, you first have to figure out where it is. Since my Class A is a regular gas model, the engine is in the front and the battery is mounted in front of and below the primary radiator. It's accessed by opening the "flip down" front cover. Some RVs put their batteries in weird places, like under the entry steps or in a separate compartment. Hard to replace if you can't find it! Remember this is NOT the same battery(ies) that powers the "house" portion of your home on wheels. Once you find it, you'll have to remove it.

Mine had quite a lot of corrosion on the terminals from outgassing so much, so before I could even remove the terminals I had to use a wire brush to remove the bulk of it, especially from around the terminal bolts. Once the corrosion was mostly clear, I found that the negative terminal was actually separated into two pieces, so had to be replaced. The Positive terminal, while nasty, was clean-able so could be reused. Remember to remove the bracket bolt holding down the battery. If you don't, you will have a very hard time lifting it out. Don't ask. I won't tell. But my back still hurts! 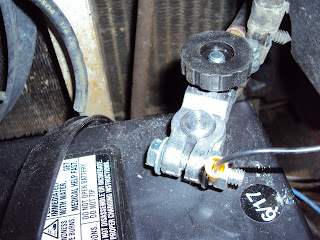 Putting on the new terminal is easy, just two bolts that squeeze the cable. Loosen the old ones, clean the cable end and put on the new one by tightening both bolts one at a time until they evenly squeeze. Make sure they are tight! Once the battery was out, I attached the new Negative terminal (This one has a quick disconnect knob.) and added some dielectric grease to prevent corrosion. Reattach the bracket to hold down the battery. Double check that everything fits and no wires are pinched under or alongside the new battery. There should be ample slack in any wires that connect to the terminals.

Most batteries come from the store charged or mostly so. Everything should work fine once it's installed. All in all, not a difficult job at all.

Be Seeing You... Down The Road,