Scotty, We Need More Power...Solar Power That Is! [Part 1]

It's the 50th Anniversary of the debut of the original Star Trek TV Series. I remember watching it on a reclining chair with my Grandfather. Good times. I've been working on developing and improving a solar power charging system for RV's for quite some time. This will be the third generation of panels I have installed. But these are no "regular" solar panels, they are the latest available, approaching 22% efficiency and by virtue of that, reducing their size even more. I have a TINY roof. I need all the space I can get. Before I was forced to have custom built panels created for the specific space available on my roof...TWICE. This time, because of the significantly reduced measurements, I am can go with a stock size. This has really reduced the cost and (again) because of the small size, allowed me to increase the number of panels AND the power generated. 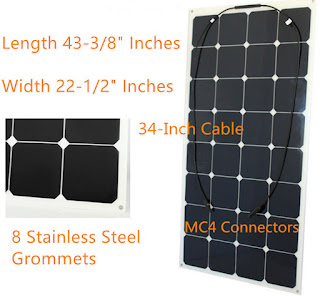 The new panels are rated at 100 Watts each, but I have found they actually average around 110-115 Watts each. The are semi-flexible like the last two sets, but are slightly thicker and use a different "sandwich" of materials. That will increase their longevity and makes it much easier to place them on the roof without cracking the individual wires and/or solar modules. The biggest change? No more very thin wires running across the front of each cell. Now the entire back surface of each cell is covered in a sheet of pure copper and then each cell is connected to its' neighbors with a flattened "dog bone" shaped link. This makes them MUCH more resistant to vibration. I believe the last set (hand made prototypes) had several of the small contact and feed wires break from the vibration on the road.

They look different as well. The surface is a pure black with no lines at all. They are still NOT perfectly square so,  you still get some white space around each one, but it's OK visually. I'm really not all that concerned about what they look like as they are essentially invisible from the ground. Only if you climb the ladder can you see them at all. I am using the same 3M 760 Paralastic adhesive I used before as it has held up perfectly over multiple years with the other panels. So well, in fact, that removal was tough. I received some great advice about a power tool that made short work of the adhesive removal. Wish I knew about it before I was half-way done with the job! Ah well, hindsight is always 20/20! The panels also have 8 grommets around the outside edges (corners and long sides) that I am not using. In fact, on a few of the panels these will be trimmed off to allow me to mount them properly with adhesive.

The installation on a "virgin" roof wouldn't take very long at all. I had to clean off all the old adhesive and clean my fiberglass roof very well first. That's a labor intensive job, not difficult...just took a long time. Th first step was pulling off the old panels. Using a sharp putty knife and lots of pulling power I managed to remove each panel in turn. Then I scraped the residual adhesive off with the putty knife (at least until I found out about that oscillating multi-tool!) This adhesive is designed to NOT come off unless you REALLY want it to, it's truth in advertising. Both of the old sets of panels  stayed put at greater than highway speeds (sometimes a lot greater!)


Next step was placing the new panels temporarily in their spots and taping off the edges so I knew where to put the adhesive layer.. When had to modify several panels by cutting edges off to make sure the fit flat and weren't going to be shadowed by objects already on the RV roof.   I was able to easily cut them (well it was kind of easy) cutting them with a sheet rock knife and a long metal straight edge. You have to be very careful not to get too close to the black solar modules themselves and don't let the metal straight edge scratch the surface! I used the plastic bag the panels came wrapped in as a make-shift surface protector. You can get pretty close to the solar modules, I left 1/2" or so as a minimum. 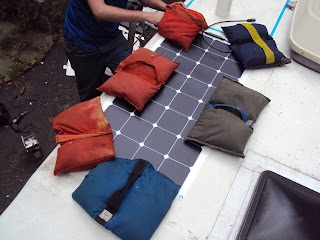 Before we began placing the adhesive on the roof, we carefully removed any remaining residual with isopropyl alcohol. That also removed any oil and dirt from the area. It is critical to remove any residue as it may interfere with the adhesive sticking properly. Don;t forget to remove it from the back of the panel as well as the roof surface! Once that was done, two of use gently "hovered" the panel above it's taped spot on the roof and placed one corner then the next. Then the rest followed smoothly and gently to make sure we had no air bubbles and it wasn't crooked. You can move the panels a tiny bit once they are placed on the adhesive, but not for very long. It pays to be careful. Then sandbags are placed around the edges and somewhat into the center so the panel is held flat and in full contact with the adhesive. These are left for a couple of days to cure properly. It must remain above 55 degrees Fahrenheit!

I figure with a roof without panels about 45 minutes per panel once you figure out where they should go. Before, I was limited to 3 custom sized panels. The last set gave me around 500 Watts. I am now able to place 6 panels in about the same amount of space! Giving me around 640 Watts to play with. With an MPPT controller boosting the output (albeit slightly at 10% or so) I should now be able to fully charge my batteries on most days by 10AM based upon my average nightly usage.

Next week we will tackle the wiring of the new panels. It was a little different than the last two sets and a bit fiddly. Stay Tuned!