On my quest to be as close to self sufficient as possible, one of the many things I wanted to do was become an "off the grid," no generator use kind of guy. When I first started looking into HOW to do that, it became obvious that I had a lot of learning to do before I could even begin an install or even purchase the system I needed.

Research! As always is the first order of business. I figured a good place to start would be the roof. After all, my RV is very compact and that means severely limited roof real estate.


As you can see, I had very few choices for panel placement based on all the "stuff" already up there.

After figuring out the sizes I began looking for panels that would fit. This is where it got frustrating. It seems that there were VERY few panels that could meet the narrow width I needed. I searched and called around for months trying to find something that would fit the limited space AND provide the minimum I needed to meet my electrical load demands.


I had to figure out how much power I use on an average day. I added up all my electrical needs (and wants) including, lights, water pump, furnace, A/C, microwave, computer, phone charger, appliances, and some miscellaneous items. Right away I discovered I would need an inverter to power the AC 120v devices from the batteries. We'll cover that more in depth in a later section of this multi-part article. Then I found out that I would not really be able to run the roof A/C on solar power for long enough to make a difference, so that was out. I discovered and added in all the little parasitic 12V loads I had. Things like the CO detector, stereo memory, etc.

A word about RV lighting. My RV was built before the use of LED lighting. So all of the interior and exterior bulbs were regular bulbs. I had NO idea they drew so many AMPS from the batteries! The smallest one I had in a swivel cockpit style fixture drew 2.2 AMPS every Hour!! That started me off on finding nice warm white LED replacements. (Stay Tuned we'll cover those in another article!)

So, having figured out I needed between 80 and 100 amp-hours per 24 hour cycle it was relatively easy to find a formula online to calculate what I needed in WATTS. Bear in mind my worst day estimate was 4 hours of sun per day in winter. You get MANY more hours of sunlight in the summer. If I use 100 amp-hours at 12 V I need to have at least 25 amps generated over 4 hours of sunlight. (4x25=100) If you multiply 25 AMPS times 12 VOLTS you get 300 WATTS. (W=A*V) Figuring in losses due to cable length and de-rating the panels' output so we'd have a healthy safety margin I added 20% more (60 WATTS). I KNOW this isn't exact, but it was fine for figuring out if I could even produce enough power from the roof space I had. 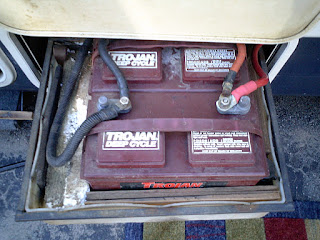 Batteries. I have 2 115Ah lead acid batteries in a small drawer under the RV. They give me 230Ahs to play with. You aren't supposed to use more than 50% of the battery capacity of wet cell lead-acids to extend their lifespan so I really only have 115Ahrs to play with. Sheesh. It all seemed overly complicated, but it works out, I promise.

*In another article we'll look at expanding battery capacity and some new, exciting technology slowly coming down the road.*


Finally, I was able to look into panels that would fit AND give me the WATTS I needed to charge my batteries fully each day, with some extra left over. There simply wasn't anything available that would fit the limited space I had.

This was NOT going well.

You know, if you look hard enough you can find almost anything on the Internet. I found some bleeding edge technology that would work. They are semi-flexible, aluminum backed, mono-crystalline highly efficient panels that I could get manufactured in almost ANY size I needed. Eureka! The only trouble was they were only made in China by a few manufacturers. So I spent a couple of months corresponding with various China based factories figuring out who made the best product and was the easiest to deal with. We worked on size, number of panels, panel voltage, and how to get them to the United States.

In PART 2 of this article, we'll look at these choosing the specs for these panels, choosing a Solar Charge Controller, how to get them to stay on the roof and how to wire the whole thing up without melting anything important.