How To Cheaply Add XM/Sirius Satellite Radio To Your RV and MORE!

A while back, I bought a new car that came with an XM/Sirius Radio trial subscription. basically, they give you three free months to try it out. I've always been a radio fan. Lately tuning into stations while traveling has been getting more and more difficult. I use my mini laptop or cell phone, connected via Bluetooth to my RV stereo to playback my collection of music. That's all well and good, but what about news? Music I DON'T have? Comedy? You see (or rather hear) the picture. I liked XM/Sirius...lots of choices not so many commercials. My RV Stereo doesn't have a satellite radio compatible receiver built in. How could I get the programming then? 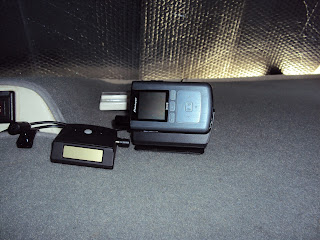 I know it's a subscription service, but if you already have a subscription for another vehicle, adding on an extra receiver is pretty reasonable. On a monthly basis (I usually pay for the year to get the discount.) it worked out to less than $9.00 per month) I didn't like the idea of having a permanently mounted receiver in the RV...what if I wanted to take it inside the sticks and bricks house? Or Hiking? Or even another vehicle. I have a great system on my Motorcycle to listen to music through my helmet comm system and frequently use a portable music device as a source. Now I can have Satellite radio as well.

After doing quite a bit of research, I found a (now out of production) XM radio made by Samsung and marketed under both the Samsung and Pioneer brands,. It's called the "Inno" and was marketed as a completely portable solution for satellite radio. If you look online, you can find LOTS of them on auction sites for VERY little money. I found one, with the home docking kit and extra antenna for under $50.00 shipped. The rechargeable battery is replaceable and it uses the same one as MANY digital cameras. I found them for about 1.00 dollar plus shipping! There are others, but I liked the color screen and the home docking system would work great in the RV.

The only real difference between the Samsung and Pioneer versions was an FM TRANSMITTER. You know the kind that lets you transmit to your Stereo on an unused FM frequency/channel. Since I had already used my extra input for my Digital media system, I wanted the FM Transmitter to work. After a bit of searching, it appeared that the Pioneer and Samsung versions were exactly the same hardware and the FM transmitting ability was left out on the Pioneer firmware. I found (online, where else) that you could "flash" (reprogram the device) from your PC with the Samsung firmware and it would activate the feature! Sure enough, I downloaded the Samsung firmware and the maintenance/update application, clicked a few times and Voila! I had FM capabilities. It came with a remote control as well...I can operate the system from anywhere in the RV or my passengers can tune in what they like without being in the driver's seat. (Which is very difficult if I'm driving!)

After that, it was a simple matter to attach the cradle/dock to the dash with velcro and run a 12V cable for power. I put the antenna on the dash, near the windshield and have great signal. Now I have cheap (Relatively) satellite radio in the RV when I want it and elsewhere when that comes up. Win/Win!