It's been months. And more months. I haven't had a day off in 5 Months that hasn't rained. My maintenance tasks around the house and RV have gotten pushed back over and over again. Some may blame global warming. Maybe, but nonetheless it's disheartening to not be able to get anything accomplished.

For example, I began writing an article last week about purchasing and assembling a 24'x22'12' two-car fabric garage just so I can work inside, out of the weather for the off season. It finally arrived. Today. Guess what? It's RAINING! I know, it was a holiday yesterday and no deliveries were made, but come on! Now that article has to be postponed until next week so I can take photos of the assembly process. Not to mention not being able to work on anything...again! Moving South (or West!) is beginning to become more enticing. 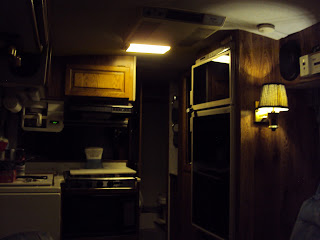 It's not that I don't like rain. When I am in the RV and the raindrops are falling, it's beautiful. Warm, dry and comfortable. Make some coffee, maybe a snack...watch some video, play a game. Whatever...no pressure...well, unless you have a leak! I've spent time in the RV during major storms, where power has gone out for over a week and the weather was not just nasty -- it was downright dangerous! A safe haven. On the other end of the scale were days that were so hot that without the air conditioning and refrigerator in the RV it would have been far more uncomfortable.


We all have projects to accomplish. Bad weather puts a "damper" on things. On my last trip to Florida, we had sporadic rain showers that slowed all the events and work down to a crawl. At least it wasn't cold! Of course I had to winterize in the rain this year. Fun. Well, not really. I've got to look into figuring out how to efficiently heat the new garage (or just the RV) to keep the pipes from bursting over the winter. No way to really enclose them... I looked into heat pads (120V relatively low wattage) for the tanks themselves, but so many pipes are close to the outside, I'm not sure I could make them all warm enough. Besides, they are the older gray pipe (not PEX) that is prone to cracking.

I don't usually complain...well, OK, maybe a little bit. But this is getting ridiculous. I did hear that we are going to have a mild winter...allegedly. I'll believe it when I see it. I wish I could send a good portion of this rain out West...to California where it would do some good!