No Cover This Winter - I Bought A Big Fabric Building! - Was It Worth It? Part 3

Well, it's done. Sort of. I managed to get the sides and roof up and attached. Even the roll-up door kit (only one side is included) was finished...with some difficulty! It wasn't too bad. Even with just one extra person. That's not to say there weren't difficulties. Overall, I am somewhat satisfied by my purchase. There are definitely some changes I would make to the assembly procedure and to some of the hardware and supplies that come with the kit. There were quite a few issues that had to be worked through to complete assembly. Not that any of them were insurmountable, but when you purchase a full kit, you shouldn't have to climb mountains to be able to use it.

The main issue that made the install difficult were the poor instructions. There were steps that were backwards in the numbered sections, whole steps left out and pictures that really didn't illustrate the process properly. In this day and age, having a corrected instruction manual or even some notes/more photos on a company website is easy to do. No one is asking for them to spend more $$$ on printing new manuals, but when phone help is only available during the week and most folks are going to put them together on the weekend....well, you see what I am getting at.

When we were at the point of installing the roll-up door kit, and there really weren't any detailed instructions. Having to wait on hold for a long while before having someone from the factory explain that the instructions are long out of date and they change the product over time, does nothing to make me feel better about the company nor their product. I mean, running changes (especially to increase quality or ease of assembly) are great, but if you don't change the manual or point to a place to get a list (change-log?) of updates, all you are doing is slowing down the process and losing customers in the process. Don't even get me started on the person that answers the phone. Customer Service? What's That?? 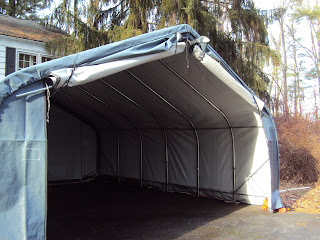 Let's just look at the hardware and kit pieces. In Part 1 of this set of articles we put on the end covers. The slits in the fabric were in the wrong place and 2 weren't cut at all! Now, after looking at the printed manual, their website and trying to figure it out, I stumbled (many days later) on a YouTube video that shows that the cuts are in the wrong place from the factory!!! This was confirmed by the factory technician later on. Why wasn't this mentioned ANYWHERE by the factory? It caused me to have to cut the fabric multiple times to make it fit, because we all believed WE had assembled something incorrectly! How frustrating is THAT!

I've had some snow fall here in the North East, about 2 inches a couple of times. The structure held up fine. That's a good thing. I am adding a couple of lolly columns to reinforce the roof peak rail. It may not NEED it, but probably won't hurt either. I'm STILL having problems unzipping and rezipping the zippers. It's a function of how the end fabric fits over the top arch rails, but there should be a better fit, or some advice to get it to all work smoothly. Word of mouth advertising is the BEST way to sell product. If your product is good, you have reasonable customer service, you will have satisfied customers that extol the values of your product and recommend it to other. Common Sense really.

Well, I can say that once all these trials and tribulations were done, the finished product is an 8/10. I'd like to see better closures on the corners (the bottoms have relatively large gaps). I'd also like to see a better self-healing zipper system for the doors. I had one fail. Everyone that graciously worked on this project with me wanted better rope. It's used for a bunch of things (like pulling the bottom of the fabric to the base rails. It's very inexpensive polyethylene rope, that doesn't like to stay tied and loves to "unbraid" itself. Next year I will be replacing it with better cord and perhaps some bungees as well.