When To Pure Sine Wave And When Not To - Is It Really Needed?

The 12 Volt system in any RV takes care of most of our camping electrical needs. Lights, Fridge controller, Furnace fan (and sometimes ignition), water pump, etc. That being said, having 120 Volt house style electrical power is very useful. I've written all about having a big, Heavy Duty inverter for supplying electrical power to outlets in the coach, but mine is a "modified sine wave" model. It works fine and dandy. There are a few gotchas that could happen, but haven't to me...yet. For instance, I have heard that microwave ovens work at much less efficiency and harder when fed with modified sine wave 120V AC. Maybe. I know some laser printers just won't work at all. The same with some old style chargers for drills and the like. And inductive loads like motors. As with everything, your mileage may vary (YMMV.) So what to do if you are nervous something could get damaged? Read on!


First, the main concern. The power we have coming into our homes is 115-120 Volts (mostly) and 60Hz. It looks like an ocean wave in shape. Very old school analog. Newer, Pure Sine Wave inverters replicate this wave so it's indistinguishable from house electricity from the grid. Older (and cheaper) inverters take 12 Volt Battery power and change it to be 120 Volt (or so) and kind of a 60Hz wave. Kind of? Well, since they are a digital device, they can't really perfectly replicate an analog waveform. So they simulate it by producing one that has jagged edges (multiple on/off cycles). It usually works fine as is. In fact, higher quality inverters have so many steps that unless you look at the waveform closely, they look purely analog. Just like your new-fangled TV is made up of tiny squares or dots, the closer you get the more "jaggedness" you can see. The trouble happens when sensitive electronic items cannot cope with the stair-step quality and begin to malfunction and/or overheat.

I have tested everything I can think of on my regular modified sine wave inverter. I have a Xantrex 1800 Watt (continuous) one. It has run everything I've thrown at it. When I installed my new digital media players and the experimental OTA Satellite system (Stay tuned for an article on that thing!) I figured it couldn't hurt to have that stuff powered by its own Pure Sine Wave inverter. I mean, it's not consuming a large amount of power, and pure sine wave inverters have dropped dramatically in price, so...why not? 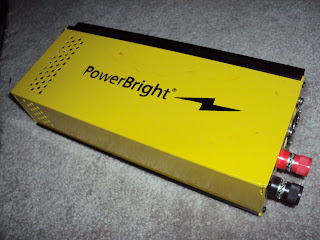 I picked up a quality 300 Watt Pure Sine wave inverter and wired it directly to the main 12 Volt fuse panel in the RV. Since 300 (350 Max) Watts / 12 Volts = about 30 Amps maximum, I made sure the wiring was heavy enough and the fuse was at least a 30 Amp to protect everything. It was still wired through the energy monitor, so I could keep track of energy usage as well. Yes, it's made in China, but tested on the workbench it puts out very clean power. For just over $100 USD online, it was economical to purchase.

I really don't see any difference and my "big" inverter doesn't really use that much power when in standby, so I'm not sure I've gained anything. At least now I have an option. Who knows, I may come across something that requires pure sine wave power...I did want to put an old Okidata LED "Laser" printer on board and I KNOW that hates modified sine wave power...Where can I find THAT antique!