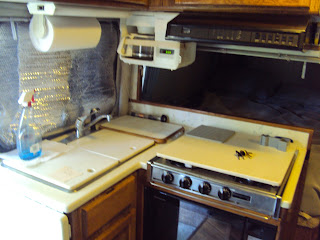 A while ago I wrote an article about an inexpensive LED light that was so good, two of them have garnered a permanent place affixed to the side of my metal range hood. The only drawback they had, was the inability to aim the light without holding it in your hand (or more likely in your mouth!). You couldn't really balance them on anything.

Well...I ran across one that you can AIM and is less expensive and even brighter. So far...what's not to like?

Well, let's start with the good. It's brighter since it uses a newer technology style of LED bulbs and there are 20 of them! It has the same flood light and flashlight modes. However, the flashlight side is still 3 older style LEDs. It's just as bright as the old one, so I guess that's OK. Same method of operation. One click for flashlight, click again for flood light and once more to turn off. Simple to operate. It still has a folding hanger on the back, which is great. There is a stand attached with a hinge on the sides of the light -- this can act as a stand or a handle. Built into the stand is a strong magnet.  This is where it wasn't Quite as useful as the old one -- storage. 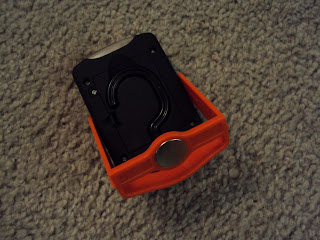 I have two of the old style lights attached to the side of my range hood. The magnets are flush with the back of the lights, so they stay flat and secure while underway. The new light forces the light to "stick out" from the surface and a bump in the road will cause it to drop off. It also sticks out far enough to get in the way, generally. I still like this light. A lot! And with a $2.50 price point (including batteries) at any Wal-Mart, it's a bargain. My other lights are usually $2.99 to $3.99, depending on the current sale. I couldn't take a photo of the light while it was on -- it's really too bright!

I often wonder if there is a "flashlights anonymous" program. I mean, I see something unique and new and I have to have one. I guess as far as vices go, this one's not too terrible.