Winter Camping? - Will That Even Work? 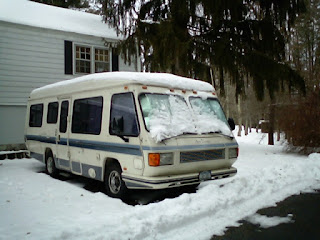 Winter Camping.  I've always loved the idea of traveling in colder climates (yup, even the snow) in my RV. Stopping for the night and bedding down in a warm RV with a hot meal before. Getting up in the morning to have a hot shower and some brewed coffee and breakfast. Watching the snowfall through the big windows.
Great idea. Difficult in practice. Most RVs aren't equipped to camp in the dead of winter. If the temps stay below freezing, all sorts of things can go wrong. Can you camp in the winter anyway?? Well, the answer is...sort of. Read on. 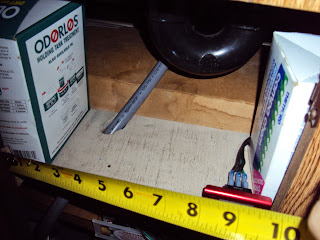 The primary concern is water. When it freezes it expands. Enough to burst pipes and do some real damage. If you aren't aware, most RVs plumbing has pipe runs that are VERY difficult to get to. A split in one of those could be catastrophic. Hard to repair since they are almost impossible to get to without taking down or cutting into the walls and floors! This is why we drain all the water and blow out the remaining water before winter storage. You could also pump in non-toxic RV antifreeze instead. Next up is the heat lost through single-pane windows and the seals. Thankfully, I have dual-pane glass in all my windows, so they are not that bad. Still, they can be insulated easily with plastic film. 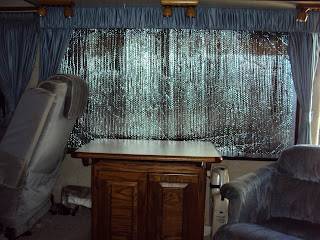 The main problem with wintering in RVs is they aren't really designed for colder weather in the first place. Most aren't well insulated and lose heat VERY fast from the interior spaces. The water and waste tanks have at least one surface hanging below the living areas (though a very few RV's have enclosed tanks) so they are exposed to the cold with NO insulation. How can we get around these limitations??? I started with using Mylar to fully insulate all the windows. This stuff is easy to work with and very inexpensive AND works great!

Insulate and heat! If you are going to be parked a long time (the definition of long is really flexible depending on your own opinions as to what it takes to set up and tear down!). You can surround the lower exposed sections of your RV with insulating material and seal out the wind and weather from getting underneath. This will do A LOT to keep things warmer under there and inside. Much heat is lost from underneath and insulation is the easiest way to stop a great deal of it. As always, the primary concern will always be the water in your pipes. If you have compartments that are next to the pipes, you can either run a duct from your furnace into the compartment(s) or simply place a low-wattage light bulb in there to generate heat. The first solution is great if you can make it work. You have to use an old style incandescent bulb (no LEDs!) because they generate about 85% heat for 15% light output. That will keep the compartment (and the pipes) above freezing. 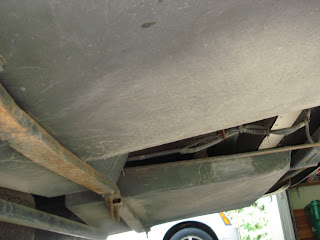 That won't help with the exposed tanks though. There are quite a few solutions to that problem, mostly based on heater pads that stick to the tanks themselves. The main issue with all these electrical solutions is that they rely on A LOT of amps to work. Fine if you are at a campground, plugged into shore power, not so good if you are running on battery power only. You COULD just not use water. Some folks use RV Antifreeze to flush their toilets. Umm...OK, but I really like having a hot shower in the morning and I am NOT bathing in the "pink stuff!" Besides, my tanks are large and would need some BIG pads.


Winter camping can be done...after a fashion, but it's not really the same as my perfect image. Maybe the manufacturers will catch on and make some RVs that are configured for four season...though I don't believe that is likely.