Even The Simple Repairs - New Hitch Receptacle And Trailer Wiring 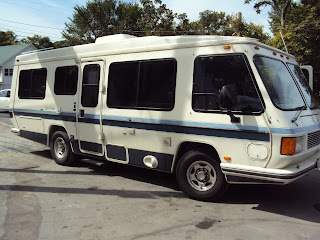 Likely because my RV is a 1991, it had a round 4 pin trailer wiring receptacle. A while back (OK a LONG while back) I bought a 4 Pin Round to 4/5 pin Flat connector to use with my old trailer. All was well. While preparing for a trip that would require a different type of trailer last week, I found out that the new trailer had a 7 blade connector and there was no adapter available. In fact, I wouldn't be able to use the electric brakes, trailer auxiliary power nor the reverse lights! That wasn't going to work. Time for a new receptacle and wiring. It's only 7 wires total, how hard could it be?

First I had to source a new receptacle for the RV side. Thankfully most auto parts store chains have several to choose from. I decided to go with the newest "standard" the seven blade style that the trailer I was borrowing had. I found one that had that AND an additional 4/5 flat style connector so I could use my old trailer without an adapter. Wow...it was MUCH larger than my old one. After taking the old one out. It was only two machine screws holding small nuts to a very beefy steel welded bracket attached to my hitch cross-member, it became obvious it wasn't going to fit in the original hole. I could have simple let it hang lower on the supplied bracket. But aside from looking terrible, it worried me being lower than the hitch receiver. If it COULD get caught on something it WILL get caught on something! 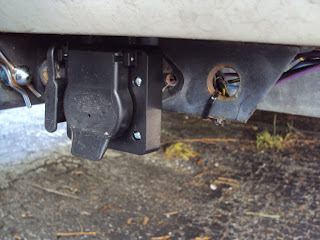 Out came the Dremel with a cutting wheel. Most likely you would NOT have to do this, but I did. Remember, Murphy was an optimist! I traced the new circular size on the old metal welded bracket and cut. And cut...and cut some more. I went through 5 abrasive discs before I was done. Not difficult, but time consuming. But now the new bracket would fit in the space the old one was and wouldn't stick much farther down. To be honest, it IS bigger! I'll try and paint it later on. It will be prettier and more rust resistant as well.

Next was the wiring. Lets open up this can of worms. (Get it..wires...worms..) My 4 way round connector gave me tail and lights, left and right signals and brake lights. That's it. The new 7 Blade one adds reverse lights, electric brake signal, and auxiliary trailer power. First I had to connect the 4 wires I already had. According to the manual from the new receptacle I should have a YELLOW wire for Left turn signal a GREEN wire for Right turn signal a BROWN wire for tail lights (and marker lights) and a WHITE wire for Ground. Seemed simple enough. I even had those colors in my harness. Spliced the colors together, plugged in the trailer and....nothing. Well I had a left signal flashing. 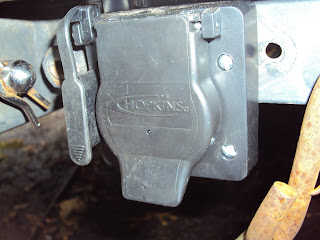 OK removed all the wires and swapped left and right. reconnected. Now I had a right flashing signal and nothing else. What!?! OK, time to pull out the test meter. After a few quick tests, it seems that not a single one of my wire colors matched the "standard" pattern. What have I learned? TEST FIRST!! With everything connected, properly taped and working I mounted the new receptacle in its newly enlarged bracket. Now I have both receptacles for both the trailers I currently use AND the ability to buy an adapter for ones I don't. This SHOULD take care of towing for the immediate future.

What about the additional wired features? The reverse light addition was easy. I simply connected the trailer receptacle purple wire to the reverse light on one side of my RV. The other ones will have to wait until after the trip. Likely I will have to run long wires to make it all work. I really like the idea of having an electric brake controller and being able to charge or run lights and batteries in the trailer. But that's for another article!