I really enjoy fixing things. I also like the money savings you receive when you do something yourself that would cost a significant amount at a professional shop. I am NOT suggesting every job is do-able at home, but most are. Lately, I had noticed an increase in engine coolant temperatures while driving in warm weather. Since I had already installed an electric auxiliary radiator fan and a transmission oil cooler fan, the temps were still manageable They weren't above the red line, so I just monitored them and switched on the fans when needed. On a long drive last weekend I noticed the loud engine driven fan (which is directly below, and to the right, of me since the engine is mostly inside the cabin below a cover) wasn't nearly as loud as it had been. Hmmm. After some diagnosis, the viscous fan clutch was found to be failing. Time to replace it.

How did I figure out it was on its proverbial last legs? Simple, with the engine cover off I rotated the fan. When it's cold the fan should turn relatively easily by hand (be careful, it's dirty!) After warming up the engine to idle operating temperature, rev it gently until it heats up, shut it down, remove the key and try turning it again. Should be much harder to do. Mine wasn't. Time to replace! Essentially, the viscous fan clutch works by sensing the temperature of the engine and opening (or closing) an internal valve to "lock" the fan to the engine's speed. This increases the fan speed and moves more air, cooling the engine. They don't last forever! 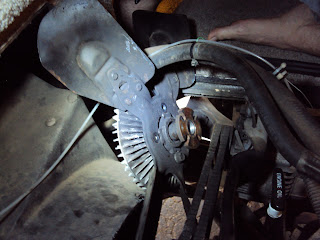 Once you have determined the fan clutch is bad, you've got to come up with a replacement. I did a bit of online research based upon my engine manufacturer and model. It wasn't to difficult to find. There were actually three models: a normal duty one, a heavy duty one and a "severe" duty one. They were so close in price, I chose the severe duty model. After ordering it online, it took 2 days to arrive and looked, essentially, the same as the old one...albeit with bigger cooling fins and a "beefier" outside case. Now I had to remove the old one. How hard could it be? Only four bolts needed to come out. 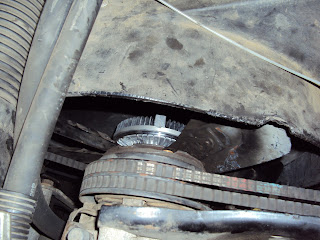 As you know....nothing is ever easy for me, but after reading a lot of articles from others who owned the same engine, I had found a great tip. This will work for most installations. Get two bolts that are the same size and thread number as the bolts that you are removing. Make sure they are at least 1 1/2" in length. Then cut the heads off! This will give you two "studs." Hang on...it will become obvious soon enough. Assemble your tools. I needed two 1/2" open-end wrenches, a large heavy flat bladed screw driver and the aforementioned home-made studs. 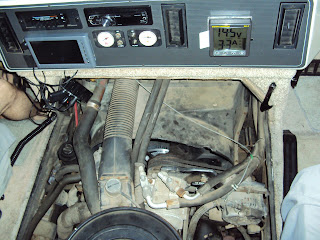 First remove two of the bolts holding the fan clutch to the drive pulley. Make sure they are diagonal from each other. Use the heavy duty screwdriver to gently rotate the fan to get to each bolt. Once they are screwed in finger tight, remove the other two bolts. You will now be able to remove the fan and the fan clutch from the pulley without having to remove any belts! If you have the room to take the entire assembly out, do it now. If you have full access it's very easy to remove the fan from the clutch and replace it with the new one. Then simply put the new assembled fan, and fan clutch, back over the two headless bolts and replace the other two to hold it on. Rotate to access the headless ones and remove them one at a time (replace the original bolt in the hole after each is removed). Tighten everything up. Check everything is tightened!!! Done.

Of course, test the same way as before. If, like me, your fan clutch was bad then you will notice a difference right away. Even repairs that seem daunting can be done with just a little research and patience. While your engine may be a different brand, make, year, etc., the above process should still work fine. The main issue is always access; how much room you have to do the work. Mine was very tight (I have some scratches and cuts to prove it!).