Welcome to Part 2 of the new and improved Solar Panel install. (Click here for Part 1!) At this point, we have the prototypes temporarily mounted on the roof, with painter's tape. This was fine for static testing, Not so much for driving down the road! Since the old aluminum backed panels were adhered to the roof with a 3M product that wasn't really designed to come off, this was going to be a bit of a job. Not impossible, but not all that easy to do.

Hopefully, I won't have to do this ever again!


We began with the rearmost panel. Since it was close to the ladder and the edge of the RV, we could access two sides and have an easier time trying to separate it from the roof. Sure we would. This 3M paralastic adhesive is a tenacious product. I figured I could use a thin length of wire with handles on either end to slice through the adhesive a little bit at a time. Nope. All that did was break the wire. So, we tried thicker wire....nope. We did manage to get one of the corners started....only about 1/2". Next up was a thin aluminum strip about 1" wide. Nope. Needless to say I was getting a bit frustrated.

Then a brainstorm! How about using a big putty knife? Thin, flexible and strong. I could wiggle it under the corner and begin slicing through the old adhesive a little bit at a time. It worked! It was slow and difficult, but after about an hour of struggle, we were able to lift off the old panel and see the roof once again!

There was a considerable amount of old adhesive residue left on the roof, but it scrapes off pretty easily. After that we'll use some alcohol to clean the whatever is left.


You'll notice I've left all of the wiring and the junction boxes intact. Junction boxes are where the Solar panels' themselves attach to the the wiring going to the charger. For this type of install these get adhered either to the top of the panel or the roof. The prototypes have enough extra material on the edge, so I will be mounting them there. Preparation of the surface will be critical to the longevity of the install. When I installed the last set of panels, we meticulously cleaned the surfaces before applying the adhesive. Later on in this series of articles we'll go over that again. Of course, at that point, I'll be almost finished! 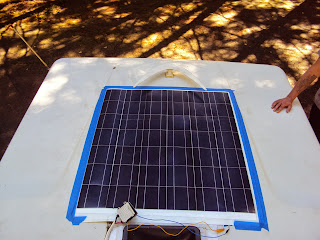 Last week, I installed 2 of the prototype panels on top of the old Aluminum backed ones. Just to test the efficiency and whether they would perform in a similar way. Well, after a week of testing I am happy to report these two are putting out slightly MORE power! There were a couple of mechanical problems...the wires that connect the junction boxes to the solar panel were on the wrong side, that we would have to change, but for a temporary test all was fine. I just used some alligator clips and wire to span the distance from the junction box to the panels output wires. To keep everything dry I put it all in some zip lock bags.

I wouldn't recommend driving this way....

The successful test was a bright spot this week. I knew we were on the right track and that all this would end up being a better, lighter system that would give me more power to work with.

Next, I called the manufacturer. We're in pretty much constant contact on this project, as they are very interested in the RV marketplace. It's really nice that they are in the U.S. and only a few minutes away from my home base. We went over the small issues with wiring placement and made some dimensional changes. He promised me 3 new prototypes, better than the old ones next week.

Once they arrive, I will have removed the old panels, cleaned off the adhesives and prepped the roof surface and setup the wiring to accept them. We'll tape them up on the roof again for a few days to take power and efficiency readings before I make it all permanent. Needless to say, I am getting excited! Tune in next week for the tests and next steps!