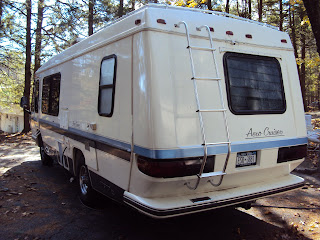 While I was in my RV a few days ago checking my smoke detector's battery, I figured I should make sure that the fire extinguisher was still "in the green" on the gauge. It was. Then I got to thinking, "I've had this fire extinguisher for at least 7 years." It's a common ABC dry chemical style available at most big box stores. It got me wondering, "Is it still good?" I mean, they aren't all that expensive to replace. So if you believe in the "better safe than sorry" school of thought, why not replace it? Is there anything on the market that's better? After a bunch of research I found some things out. Read on!


Most manufacturers recommend inspecting each extinguisher at least once a year for damage and constant pressure. It's easy to do. Look at the extinguisher: Is it dented, the handle broken or perhaps the nozzle cracked? If so, replace it. That's obvious. Look at the gauge: Is it still indicating the same as when you purchased it? Is it at least in the green? If not...replace it.  Also recommended is to flip the extinguisher over and give it a good shake and "thump" to loosen the powder inside and prevent caking. All that being said, most manufacturers recommend replacing it when it is between 5 years and 15 years old. I am not so sure I would trust my or my RV's safety to a 15-year-old (or even a 10-year-old!) fire extinguisher. For around $20.00 or so, you can easily purchase a new one. 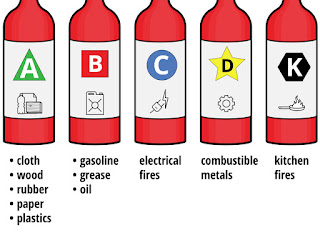 Which one to buy? Well, the least expensive is the dry chemical (powder) style. They will put a fire out (HINT-Aim at the base of the flames,) but do make a pretty big mess. The powder itself is very fine and gets into everything. But it sure beats the alternative! There are quite a few other types. As a pilot I've used various mixes of HALON fire extinguishers for decades. Unfortunately, they are hard to get now since Halon hurts the ozone layer. Halotron is similar but even more expensive. The other issue is they only work on Class B and C fires. What does that mean?


In the world of fire safety, Class A is trash, wood, and paper, Class B is liquids and gases, and Class C is electrical fires. In our RVs you really need all three. Look at it this way: If you have a fire and must discharge your extinguisher inside, it WILL make a mess. But letting it burn would cause MANY more issues, not to mention being life threatening!! After my almost battery fire, I became a firm believer in fire extinguishers as a precautionary measure.  Be safe. Replace!