Have you ever wished you had an extra hand? For example, you are working on some project that forces you to contort your body into an odd position while grasping a part AND one or more tools while you attempt to work by feel since it's too dark to see and there is no way to hold a light, too? Sure, the "flashlight" in the mouth trick or even a head-mounted lamp will work. Sometimes. Ever have a flashlight in your mouth for an extended period of time? Yuck. You may know where its been. If you do...you likely don't want to use it like a lollipop. In the past, I wrote about a very handy light that attaches with a magnet and is inexpensive and useful. But what about surfaces that aren't magnetic? Found one for that too! 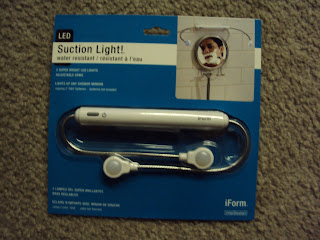 I like my magnetic light, so much so that I have two attached to my range hood. Great for emergencies...late night bathroom trips and a whole lot more. After using them for a very long time, it became obvious that they are a bit limited. If the magnetic surface isn't parallel to what you want lit up...it becomes more challenging to place the light where it will do some good. Not only will this new light allow you to bend BOTH it's lamps to where you need them aimed, it attaches with suction cups so many more surfaces are fair-game. I've been able to get light to places I never could before. Well, not easily anyway. 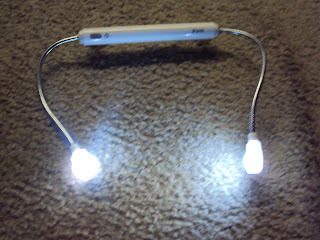 Two Lights, Two "Goose-neck" Arms, Two Batteries (AAA) Two Suction Cups and One Switch. That's it. Brilliant. The lights are LED and the Arms move (and stay) in any position you will need. Put the lights on different spots or both on one. They use Daylight (5600k) light so it's easy on the eyes albeit a bit blue (like the sky) The two AAA batteries will likely last a long time and the switch is robust. All for 2.99! I bought two! Oddly, it didn't have a magnet as well, so I just glued a small rectangular one on the back (being careful to NOT block the battery door!) and it will attach to most surfaces with ease.

Never underestimate the value of being able to see what you are working on. It also doesn't hurt to be able to reduce the stress of working on any project. No more juggling and dropping (and cursing.) If it reduces my stress and maintains what little decorum I have left....I'm all for it!

[Editor: Rich found his lights at a discount/clearance store but if you don't have one nearby, they are available on Amazon for less than $10.]