Last week it rained here. A Lot. A REAL lot. For the first time in a long while I had a leak. When I got inside after the rain had stopped, I found a good section of my wall, next to the vanity sink had warped. The paneling had gotten long vertical "creases." I tracked the water back along the roof rib and all the way to one corner of the 14" roof vent (with fan) Once I had an idea where to look, I went on the roof and found the 4" Eternabond tape hadn't adhered over the hinge properly and had been seeping water underneath. Once it made it past the entire seal it was a simple matter for the water to travel through the foam and wood "sandwich" of my ceiling and damage the wall. There was almost no evidence other than the wall damage itself. No stains on the ceiling at all. Not really a great way to spend a weekend, but it had to be fixed before the next rain! Here's how. 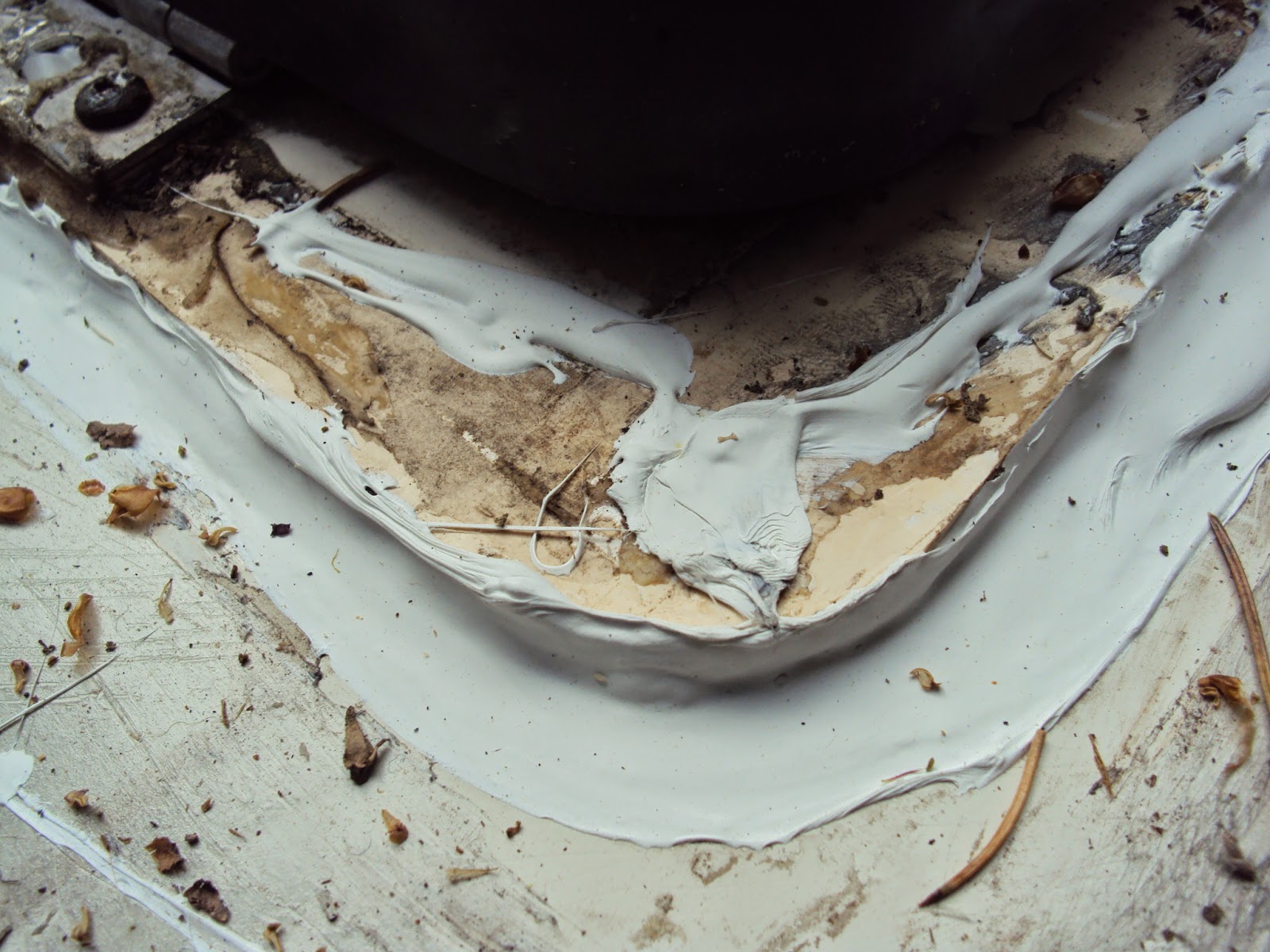 First, I was going to simply lift up the Eternabond from the area it hadn't stuck to and replace it. Once I began, it wasn't all that difficult to remove the four pieces that went around the vent's edge. After that, I split the old sealing material and removed most of it. Once you pull on it, it will likely come off in long pieces. It was dried out and cracked. That's why I put the Eternabond tape over it, believing the seal would be sound. It wasn't. Once the old seal was removed, I pulled all the screws holding the vent to the roof and ceiling. May of them were wet and not holding very well.

Once removed, the vent and fan assembly came out easily. (After the interior trim bezel was removed!)There was NO seal at all under the "lip" of the vent. Next I cleaned the entire roof where the vent would sit AND the entire surface of the vent lip where it would sit on the roof. Since there was water damage to the wood and foam ceiling sandwich, I used shims (wood) to replace the wet sections and give the screws something to "bite." I used most of a vent fan installation kit, which is the double sided version of the Eternabond tape in a 2" size. That would secure and seal the lip all the way around. Next a bead of lap sealant was spread around outside the area the tape covered, but still under the lip. Also, lap sealant was applied INSIDE each screw hole.

Once the screws were in and tightened down (not TOO tight or they would strip) the extra sealant squeezed out from the lip and was smeared smooth with a finger. Then, of course, a wind came and spread pine needles on the still sticky sealant. I had done so well keeping my hands and fingers clean this time! Ah well. After picking out the debris, additional lap sealant was used on top of each screw to make sure no leaks would "sneak" by. Once the lap sealant fully cures (could be as long as 30 days!) Another 4 pieces of 4" Eternabond tape will cover the edges of the vent installation. It will look nicer and, hopefully, add some additional protection.

The entire job took about 2 hours. The longest, most tedious job was cleaning the old sealant and tape residue off. Take it slow and be careful of your roof material. Use the right solvent for the job!! You could severely damage your roof if you don't. A lot of folks are afraid to work on their roof and/or anything that could leak. It really wasn't that difficult, as long as you take it slowly and methodically. I wasn't happy I had to get it done, but now that it's repaired, I feel much better.