When I first bought my Aero Cruiser I had the "opportunity" to drive it from three hours north of San Francisco to my home base 90 miles north of New York City, about 2,700 miles. Probably due to the excitement of that trip I thought that it handled pretty well. Nope, I was WAY wrong! It's a small miracle I made it back without being catapulted off the road or at least bounced into oncoming traffic at 70 miles per hour.

After much research I decided to renew and upgrade my suspension bits. After all, it was a four-wheel basic design with leaf springs and supplementary air bags in the back and coil springs with a transverse mounted helper spring in the front. All the info I found led me to believe I had what amounted to a Dodge one ton pickup truck in the front and rear. How hard could it be to get parts for THAT? Read on. 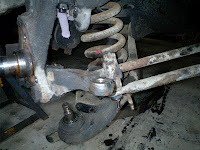 Anyone who reads this column knows that Murphy is indeed an optimist, at least in respects to my ongoing projects. When ordering the front suspension parts it seemed there were several models of Dodge pickups that use different suspension parts. Okay. . . which one do I have? My Aero Cruiser sources assured me I had one type, although the photos of my rig were different. I went online and ordered both types, figuring that would be safe. I could always send the wrong ones back. By the way, is anyone in the market for a set of front suspension parts for a Dodge pickup, circa 1990? Yup, still have them. It turns out I have the only Aero Cruiser with the 4,000-pound version of the suspension and it uses totally different parts.

That being sorted out, next up was the rear leaf springs. After looking through the online parts books I couldn't find ANY Dodge parts that would meet the load carrying capacity I needed. You know why? They're NOT Dodge springs! Turns out they are GM springs mounted upside down. Do not ask how long it took me to figure that out! On the up side, the heaviest duty versions were perfect for improving the ride and ride height in the back, and weren't all that expensive. Of course shipping on something that heavy is highway robbery!

Once all the parts arrived, dis-assembly began in earnest. Since this job required some heavy duty and specialty tools, I engaged the assistance of my favorite local shop where the guys are familiar with all sorts of heavy duty tools. They're a great great bunch of guys. I highly recommend them if you are in the area! Honest, too!

We began by removing the front wheels and the brake assemblies. Next we tried to remove the upper and lower ball joints and control arms but couldn't do anything until the transverse helper spring was removed! They wouldn't come out. I will not make that mistake again! After everything was cleaned up, all new bushings were installed and the new upper and lower ball joints, control arms, tie rod ends and shocks were fitted and adjusted.

On to the back. Did I mention these giant leaf springs are HEAVY! It's a good way to lose a toe, not that I know that first hand, but hey. . .

We used multiple jacks to hold the load, as the springs were removed one side at a time. It turned out the bushing on the shackle mounts was slightly different from the originals. Understandably, the design had changed a little after more than 20 years. We had to drill them out to a larger diameter to fit on the mounts. Not too bad as far as random difficulties go. Rear shocks were replaced too. I was amazed that the shocks were all well under $100 each. Thank goodness for the additional small miracle.

Once mounted, the RV was riding two inches higher in the rear. The leaf springs had compressed quite a lot in the intervening years. I was also two inches or so higher in the front, which really helped with wheel well clearance.

The guys rough aligned the RV and I took it home. Now to find an alignment shop that could do a proper alignment. As usual that, sounds easy but isn't. The nearest one was 45 miles away, over the mountain. Thankfully the handling wasn't really all that bad and I could get there without flying off the mountain, down the 1,000 foot drop-offs.

The first alignment didn't work; the numbers I was given were wrong. The second one worked better, but the steering wheel wasn't centered and the coach pulled to the right.

The third time was the charm! With everything setup correctly and a new heavier duty suspension, this thing handles well. Like night and day. Better than when I bought it. Maybe even better than from the factory since I used newer technology with improved parts.

For any older coach that is feeling a bit "saggy" or whose handling isn't up to par, I highly recommend this process. It isn't all that expensive, yet pays big dividends in drive-ability. You may even pick up a bit more load carrying capacity in the bargain!


Be Seeing You...Down the Road,