The continuing saga of a simple project... Well sort of!

Having panels 3MM thin and light would make installation easy, shouldn't it? Sure it would. From the beginning I was always going to mount them to the roof using some kind of adhesive or silicone caulking. Now I had to figure out which one to use. Sounded like a simple bit of internet research. They say, "Murphy was an optimist," I couldn't agree more. The normal big box home store inventory didn't have something that would work over the long haul, in all sorts of weather and temperature extremes. I'll not go into detail here, but learning all about construction adhesives, elasticity, elongation, etc. Was NOT what I had in mind when I started this project. After calling various manufacturers I found the perfect stuff! It was strong, elastic enough to provide some shock resistance and had specs that met or exceeded every physical requirement for roof mounting the solar panels. of course, it was $12.00 a tube and I'd need at least 10 tubes. Ah well, nothing is perfect.


After far too many rainy weekends a buddy and I began the process of adhering the panels to the roof. We test fit them and then taped off the size and shape of the panels on the roof. We then measured, test fit and ran the wires from where the controller would be to each of the three panels. Cleaning was next. Soap and water first, then alcohol to finish.

We applied the adhesive with a caulk gun and spread it thin with several wide scrapers. A uniform thickness would make life easier and minimize cleanup. Well, it should have! This stuff sets up FAST so cleaning up excess has to happen right away. Not to mention it gets all over everything including us. Make sure you have lots of alcohol (not the drinking kind!) for cleanup.The Sandbags (sometimes it's good to be a film maker!) came in handy to keep everything down until it cured. 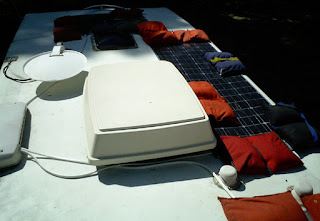 So far everything was looking good. then it began to rain, unexpectedly, a lot, for a long time. We covered the roof and everything on it with plastic and hoped the humidity wouldn't kill the adhesive job.

In the mean time I went back to researching the best way to get the power to the batteries. I had decided on an M.P.P.T. (we'll cover wiring and charging in PART 4) and was going to use the inverter that I had already purchased and installed to convert 12 Volt power to 120 Volt AC power. The trick was, how to wire this all together without frying all my wiring and becoming extra crispy in the process?

Tune in next week when we'll look at how well and not so well that went!

Be Seeing You...Down the Road,