Keep Cool!! - What A Difference A New Water Pump Makes!

Engine Water Pumps are important. A failed one can leave you on the side of the road with almost no choice other than a long (and expensive!) tow. Changing one "in the wild" is possible, but not really a viable option. Well, a couple of weeks ago I heard strange sounds emanating from my engine doghouse. It sounded like someone rattling small rocks in a coffee can (Really!) After doing some research, I thought I had found the answer...it could be one or more of the hydraulic lifters in the engine sticking. A common issue with Chrysler engines, or so I am led to believe. I decided to get a second opinion (as mine really doesn't count!) 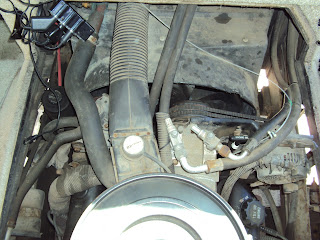 As soon as the "old school" mechanic listened, he said, "water pump is dying." OK. He went on to show me that the bearing could be moved left and right, up and down quite a bit and that was where the rattling was coming from. It also explained the elevated engine temperatures I had been seeing! No flow (or weak flow) of coolant through the radiator and engine means very reduced thermal efficiency. I caught it early. Thankfully! One new High Performance water pump was only $25.00! Including 2 Day shipping! I ordered it and figured I'd let someone else install it. Sounded completely reasonable. Of course, now the adventure REALLY began. 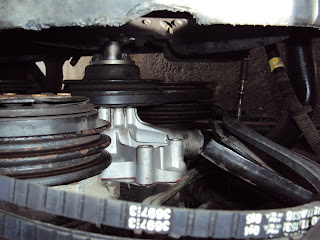 A few weeks ago, I installed a brand new, "severe duty." fan clutch since my old one wasn't engaging and turning the fan properly. The new one worked GREAT. However, since it was putting a lot more strain on the water pump bearing (it's mounted to the front of the water pump) it forced a failure of the bearing. To be honest, it was already on its last legs and would have failed soon anyway. The extra pressure and stress from the new fan clutch just sped up the process. Anyway, after a bit of a mix up with the supplier and shipping, I received the correct new pump and went over to have it installed... 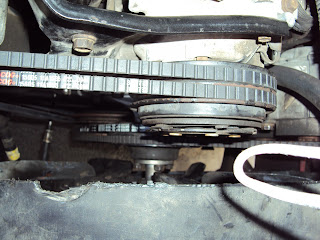 At 9AM on a Monday. Had to take a day off from work do get it done, but I have a long, trailer towing trip this upcoming weekend, so it was important to get everything working. I am VERY glad I didn't tackle this myself. Every belt and all the engine accessories (alternator, power steering pump, hydraulic pump, smog pump, all hoses, pulleys and brackets had to be removed to even GET to the old water pump for removal. So after 4.5 hours the old one is off and the new one ready to be installed. It gets put on and then everything goes back together. The parts fought us the whole way. While we were in there, I figured I should change all the belts. Why not?
Once assembled and adjusted...we added coolant back into the system. Which promptly leaked out the bottom of the brand new pump! Well at least at the seal between the pump and the engine. It's now 6PM. Everything has to come back out!! Removed MUCH faster than the first time. At 8PM we see what happened, the gasket had shifted when the new water pump was put in place. Just enough to break the seal at the bottom edge. New gasket, re-apply and put it all back together....again. Now it's 10:30PM and we put coolant back in......No Leaks! Heated up the engine so the thermostat opened, then turn on the heat and waited until the air was purged. Did I mention it required a long flexible hose AND a long funnel to get the coolant into the radiator?

Sheesh! Why don't designers and engineers EVER speak with technicians and mechanics? Maybe they assume nothing ever breaks?? Not.

Finally the system is filled, purged of all air and was ready to go at 11:45PM. And then we noticed the loud squeal from the power steering pump belt when the wheel was turned. Back underneath to tighten the loose belt. I was done at 12:12AM. It took a LONG time to get all the air out of the system. Much longer than I ever suspected it would take. Quite the odyssey.

To the credit of the honest mechanics and the business owner, they didn't give up or ask to finish the following day. They stuck with it and completed the job. Kudos to them!!

I am awfully glad I didn't tackle this in my driveway. While it's likely I could have done it, it was better to have it done. Less work...not much money (around $250) and everything works. My temps are right where they should be again...even on long hill climbs. MUCH better flow even than a new standard pump would have given me.

It pays to know some competent help. I enjoy doing my own work. But sometimes it's better to have help. Clint Eastwood said it best, "A Man's got to know his limitations."

Be Seeing You...Down the Road,