Cooking With The Sun - Another Option For Your Food Solar Thermal Cooking, can this actually work?!?         Recently, I was working on the design for my passive solar thermal hot water system and came across an article that talks about solar thermal cooking. This uses the heat energy created by the sun to cook food in a container. Some of them can get over 300 degrees in normal sunlight! If I had to compare them to something, I'd say it was like a slow cooker without the need for an outlet. Fascinating stuff, seems like a natural for extended boondocking. After researching them on-line it seems that they are in widespread use in developing countries and there are organizations trying to get them into the hands of needy folks. Sounds worthwhile to me! Anyway, there are three basic categories of design for the Solar Thermal Cooker.

First are the Concentrator types. These focus sunlight with some type of reflector onto a cooking vessel. These can be as simple as a flat piece of cardboard covered in thin mylar foil (an emergency blanket!) then rolled into a cone. It will function nicely on most cooking chores. It's REALLY cheap! And will fold up quite small when stored. Not all that elegant though and the cardboard will eventually wear out. I'd use poster-board or something similar instead. Store it rolled up in a tube. You'll also need some kind of heat resistant container that's OK for food. The darker the color the better, in fact painting it black is a good idea! And a resealable clear plastic bag to keep the moisture in. A twist tie is OK.

The Next style is also a concentrator but they focus the light from below rather than above. You can get a VERY nice amount of heat energy from these. They have to be a bit more elaborate since the focus of the sunlight has to be more intense. Parabolic reflectors are perfect for this as they have a set point where the heat is strongest. Years ago I had a Solar powered cigarette lighter that would ignite small objects placed in it's holder. It was about the size of your palm (in fact it was hand-held) and worked. Of course, I didn't actually smoke.....but...it was still fun to play with! This cooker is going to be MUCH more difficult to store and travel with. The photo is really just an extreme example as you can use a variety of materials to focus the sunlight. 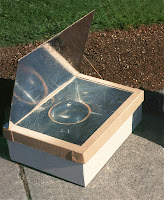 The last major sub-type of Solar cooker is the Box Cooker. I like this one. It isn't terribly complicated or finicky to setup. It can have it's cookware built-in and stores in about the same space as a typical small BBQ. Again, they can be made from a simple cardboard box, a bit of plastic wrap, a dark colored pot and a bit of aluminum foil for a reflector on the lid. You don't NEED the reflector, but it bumps the efficiency up quite a bit. These are actually some of the oldest cooking machines on the planet and have been in use for a LONG time. If you wanted, it would be simple to make one that the box section could collapse down and you stored it flat. I've seen these where the cookware is pre-mounted and you can have more than one food item cooking at once.

From what I've gleaned, these cook like a "crock pot" or slow cooker, so recipes should translate well. I was thinking you could build one of these and have it heat water all day, add a small circulation pump (or put it on the roof) and plumb it into your hot water heater. Hmmm.....sounds like a project.

This summer I will build a few different designs and try them out. Much of what I read led me to believe you don't need crazy amounts of sunlight to cook properly. We'll see. All in all, a worthy addition to the gear I carry....IF it works!