Water is Evil. How to Find and Fix RV Vent Leaks - Part.1

This week I am going to be taking a look at how to fix 14" x 14" vent leaks. Not that I wanted to look at that, mind you, but it appears that Murphy (who was, as we know, an optimist) decided it was the thing to do. Yay!

Here's the situation:
I was going about my regular de-winterization routine when we decided it would be a good idea to clean the vent fans and inside of the domes. Seemed like a great idea! Especially after the Stinkbug Invasion of last year. There was some NASTY bug bits left over from the fight. Well, after they were all cleaned up we did a few more housekeeping tasks and called it quits for the day. That night we had a heavy rain. The next day I went down to continue the work inside (it was still raining) and found a VERY wet trail leading to a saturated headliner area. In my RV the whole inner ceiling is carpeted. It's quite nice, Velcro sticks to it like crazy! Well the roof is slightly curved so water will drain off the top. That's a good thing. Although it will also drain from a leak in the vent in between the fiberglass roof and the wood and foam sandwich below all the way to the edge. In this case it was pooling near the vanity sink overhead fluorescent light.

I dried everything as best I could and scrambled up on the roof with some trash bags and painter's blue tape. After taping the bag over the vents and seams I realized tape doesn't stick so well to wet fiberglass. Back down for a towel and back up to fix the problem. Not knowing whether the leak was patched (or something much worse was going on...the mind tends to go to the worst scenarios!) I went back inside and stayed for a while to keep an eye on it. After an hour I went back up to the house and called it a day.

Here we are 5 days later and it looks as if there has been no additional water seeping in. The ceiling seems dry and what I can see of the inner roof structure is dry. The temporary fix worked!

Now we have to fix it correctly.

Since I have no idea where the leak is actually coming from, it could be the screws in the vent flanges, the caulk around and under the flange, the edge of the roof, the right thing to do would be removing the entire vent, cleaning everything and re-installing the vent properly. That's a much bigger job than I want to tackle at the beginning of the season! Who knows what evil lurks underneath! Better to start that job AFTER the end of the season. I know, you should always do it the right way to avoid problems down the road. I say it enough myself. I guess I'm just a bit antsy to get RV'ing!

Here's what I will try: 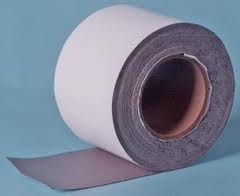 I purchased some bonding tape a 4" x 50-foot roll that has had great reviews as a seam sealer and leak fixer. I will take out all the screws and clean the top of the vent flanges of all the lumpy caulk and previous repairs. Once it's mostly flat I will put some NON-Silicone sealer in the screw holes and re-install the screws. Once finished I will carefully place four pieces of the tape (one on each edge) to cover the flanges all the way up to the vent itself. I will press down the tape until I get the air bubbles out and it is uniformly adhered to everything. Then I will cross my fingers and hope it works!

I'm thinking about filling any air gaps (from the inside) with expanding foam. Not sure that's wise...but I will look into it. I've also discovered a small crack in my bathroom shower skylight. Of course it is a non-standard shape and size. So far I haven't been able to find a replacement and I am not sure a regular dome will clear the luggage rack on the roof.

Next Week, you'll see the job being done and the results. Stay Tuned!